The delicious reemergence of freekeh in Israeli cuisine

Like boutique wine, olive oil and other specialties that were slowly revived, the green grain is finding its place in modern Israeli cooking.

In the world of ancient super grains, South American quinoa now shares a throne with an unusual grain called freekeh, at least in Israeli cuisine.

Asmoked green wheat, it’s been all over the latest Israeli cuisine cookbooks: Einat Admony and Janna Gur use it along with ground lamb to stuff peppers in their book, Shuk.

Adeena Sussman adds it to vegetable soup in Sababa, and Sarit Packer and Itamar Srulovich make it into a tabbouleh with nuts and cherries in Honey & Co. at Home.

Freekeh has reentered Israeli cuisine after a 2,000-year hiatus, yet you won’t find it at your typical Israeli supermarket.

Called Carmel in ancient Hebrew, freekeh was consumed by the ancient Israelites. It is mentioned in the biblical book of Leviticus as a part of the first “fruits” offering that Jewish worshipers brought to the Temple in Jerusalem each year for the holiday of Shavuot.

However, according to biblical food expert Tova Dickstein, freekeh most likely fell out of fashion among Jews by default. They were exiled following the destruction of the Second Temple in 70 CE, migrating to places like Europe and Northern Africa, where the practice of making freekeh did not exist as it did in the Levant.

The dramatic folk legend of how freekeh was created goes like this: A village was caught under a surprise attack, and the underdeveloped fields of green durum wheat were either burned by the offending intruders, or collected in haste by the villagers, and roasted to preserve the wheat grains.

But it’s far more likely that making freekeh is actually an ancient technique to protect the farmer against nature’s unpredictable tendencies in the late spring, between Passover when the wheat was grown, but still green, and Sukkot in the mid-fall, when the wheat would be fully developed.

This is a time of year when spells of hot, dry winds called hamsin or sharav are common, and a year’s wheat crop, so vital to ancient life, could easily be destroyed. Freekeh would be a lifeline.

In modern Israel, freekeh is widely considered a specialty grain from local Arab cuisine. The process of making freekeh — harvesting green wheat, setting fire to the chaff, separating the wheat grains, sun drying and preserving them — is described in Ruth Neiman’s cookbook The Galilean Kitchen is happening each spring in the Galilee valley of Sakhnin, the same one described in the Bible.

The practice has been preserved until this day in Galilean Arab villages, most likely brought to Israel by Arabs from countries like Turkey and Lebanon, where ancient peoples carried out the same practice using durum wheat. 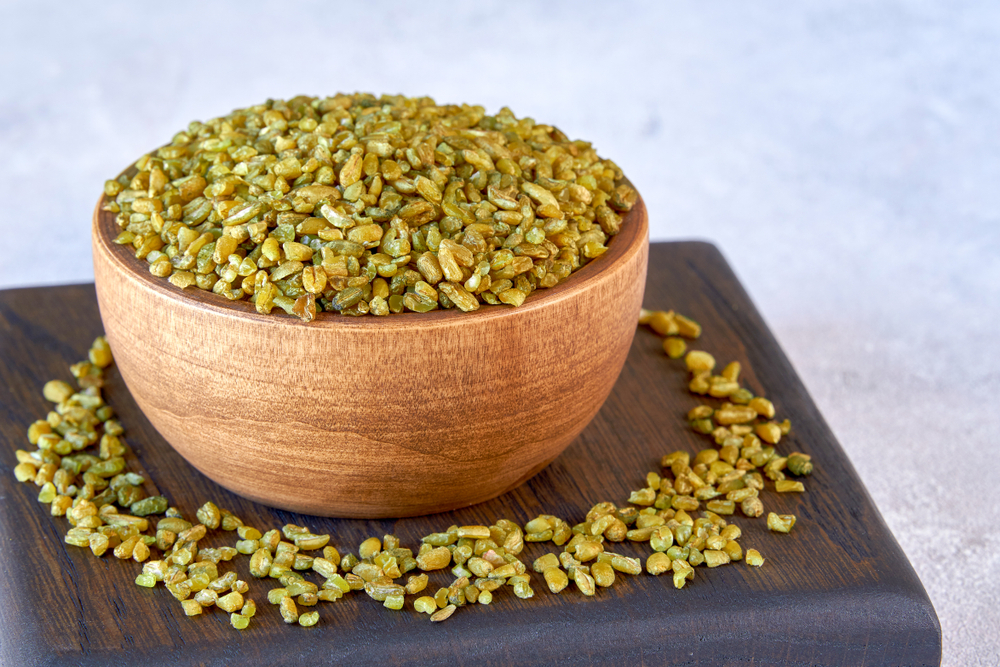 Turkish Freekeh pilaf with chickpeas. Photo by Fanfo via Shutterstock.com

Globally, freekeh caught mass interest in the last 10 years as a low-carb super grain that delivers even more nutrients than other super grains, ranking higher in iron, protein, fiber, calcium, and B vitamins, while also containing antioxidant carotenoids like lutein and the zeaxanthin.

In 2014, food photographer and cookbook author Bonnie Matthews wrote an entire cookbook on the subject, entitled The Freekeh Cookbook, using it in everything from banana bread to empanadas.

In 2015, celebrity Israeli chef Haim Cohen, famous for his Middle Eastern style home cooking, praised the grain and offered recipes in Yediot Aharonot, one of Israel’s main newspapers, gushing about how freekeh “loves lamb, goes crazy for olive oil, connects to Arab cuisine, connects to vegetables” and “always adores itself.”

More simply described, freekeh has a chewy toothsome feel similar to bulgur wheat but carries a much richer, slightly smoky flavor. It is commonly sold in whole and cracked versions, which differ in cooking times and uses.

Larger grains are commonly described as being used like rice, although the cooking method requires occasional stirring. Smaller freekeh grains can be added to soup in place of pasta or rice, used in salads, as a filler in veggie burgers, and even ground up as a healthy flour alternative.

Kosher cooking blogger and cookbook author Chanie Apfelbaum lists freekeh as a pantry staple in Millennial Kosher, alongside other grains like faro and barley.

Freekeh on the radar

Haaretz writer Vered Guttman made the case for freekeh being the new hip grain of 2012, but it was Erez Komarovsky who is widely credited with bringing the grain back to Israeli cuisine.

Komarovsky resides in the Galilean town of Mitzpe Matat, where he offers cookery courses out of his beautiful house overlooking pastoral landscapes. He is a cookbook author and television personality, also credited with bringing sourdough bread onto the radar of everyday Israelis in the mid-1990s through his successful café/bakery chain, Lechem Erez.

According to cookbook author Jigal Krant, Komarovsky saw the grain being used by his Arab neighbors in the Galilee and started using it in Israeli dishes, from where it trickled down to Tel Aviv’s trendiest eateries.

Freekeh can also be found on the menus of Arab chef restaurants like Lux in Haifa, a seafood-focused Galilean bistro where freekeh appears in a series of dishes including one where it is sautéed into the risotto with wild spinach and served with red drum fish.

Raed Nakhleh is a product of Shfaram’s famous coffee dynasty, Nakhleh. Producing a popular brand of Arab-style coffee, as well as spices, nuts, and seeds sold in stores all over Israel, the coffee heir set his sights on making freekeh into a more accessible grain internationally, bringing it to his adopted home of London under the name Fire Grain.

His line of three spiced instant freekeh mixes is produced in the Galilee. They won second prize at the Guild of Fine Food’s Great Taste Awards in England and were among eight finalists in the Health and Wellness food category at the World Food Innovation Awards in 2019. Fire Grain is available on Amazon (though ironically, it doesn’t ship to Israel).

While ancient Israeli food culture seemed long lost in the first decades of the state of Israel, recent ones have seen a return to the local seasonal cuisine of our ancestors.

Like boutique wine, olive oil and other specialties that were slowly revived, it’s all about giving the local foods their due in modern Israeli cooking.

Whether you find yourself hashtagging #FreekehFriday and buying the grain at your local Brooklyn Trader Joe’s, or seeking it out at the shuk in Nazareth, freekeh gives us something wholesome and multicultural that we can all sink our teeth into, 2,000 years on.

Jessica Halfin is an American immigrant who arrived in Israel in 2006. She is an Israeli-trained baker, gourmet cook, food and culture writer, and gives foodie tours to tourists in Haifa City.