The ultimate guide to Israeli-inspired restaurants in New York

Modern Israeli cuisine is a culinary movement spreading across the world with the intention of sharing really good food with really good people.

Everyone knows bagels, shmears, and lox are the holy grail of Jewish cuisine, especially here in New York. But do you know that kubbeh, souvlaki, and labaneh are just as significant in Jewish kitchens today?

Modern Israeli cuisine is redefining the American Jewish palate, thanks to ingredients and foods that Israelis took with them from all corners of the globe in the last 70-plus years.

There’s a lot of mixing the old with the new.

So we have the eggplant-based sabich but instead of throwing it into a pita, we put labaneh, zhoug and cilantro on it.

We have hummus and shawarma that has been elevated to beetroot, rosewater hummus and chanterelle vegan-inspired shawarma.

Israeli food follows the farm-to-table concept: local, fresh, and honest. And in its own way, Israeli food embodies Israeli culture; an explosion of very diverse flavors, the juxtaposition between different textures, prickly and soft.

Modern Israeli cuisine has no formal definition, but it is a culinary movement spreading across the world with the intention of sharing the unique joy we get from eating really good food with really good people.

And it is not just Israeli food that is having a moment.

Here are our favorite Israeli-inspired restaurants in Brooklyn and Manhattan. 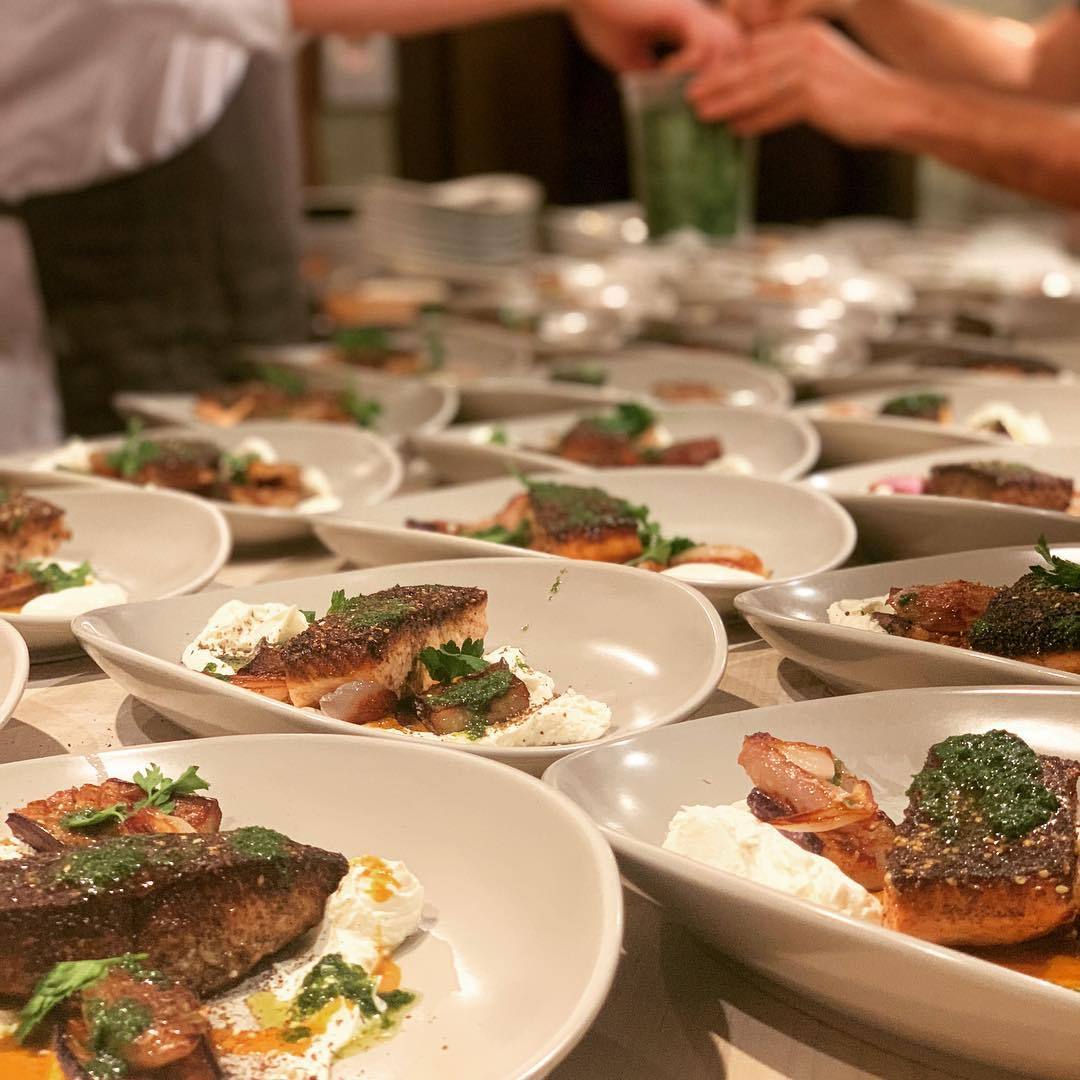 Miss Ada (misada means “restaurant” in Hebrew) is all about the gathering of friends around a table of local ingredients and mouth-watering food. Miss Ada in Fort Greene boasts an open kitchen and an outdoor patio that transports you to Tel Aviv.

Miriam is an all-day café, best known for brunch. We’ve heard they make the best feta burekas on this side of the Atlantic. Also they’re walking distance to the Brooklyn Museum.

Golda is another open-all-day café with windows, sunlight and strawberry amba (mango chutney)! Healthyish calls Golda “Israeli- leaning” cuisine. I call it the place to visit for refreshing brunch and wake-me-up coffee.

Lighthouse BK in Williamsburg is described as “vegetable forward” by Saveur. Think high-quality, locally sourced, and ethically minded food that you always want more of. A sister restaurant, Lighthouse Outpost, is located in the Nolita neighborhood of Manhattan. 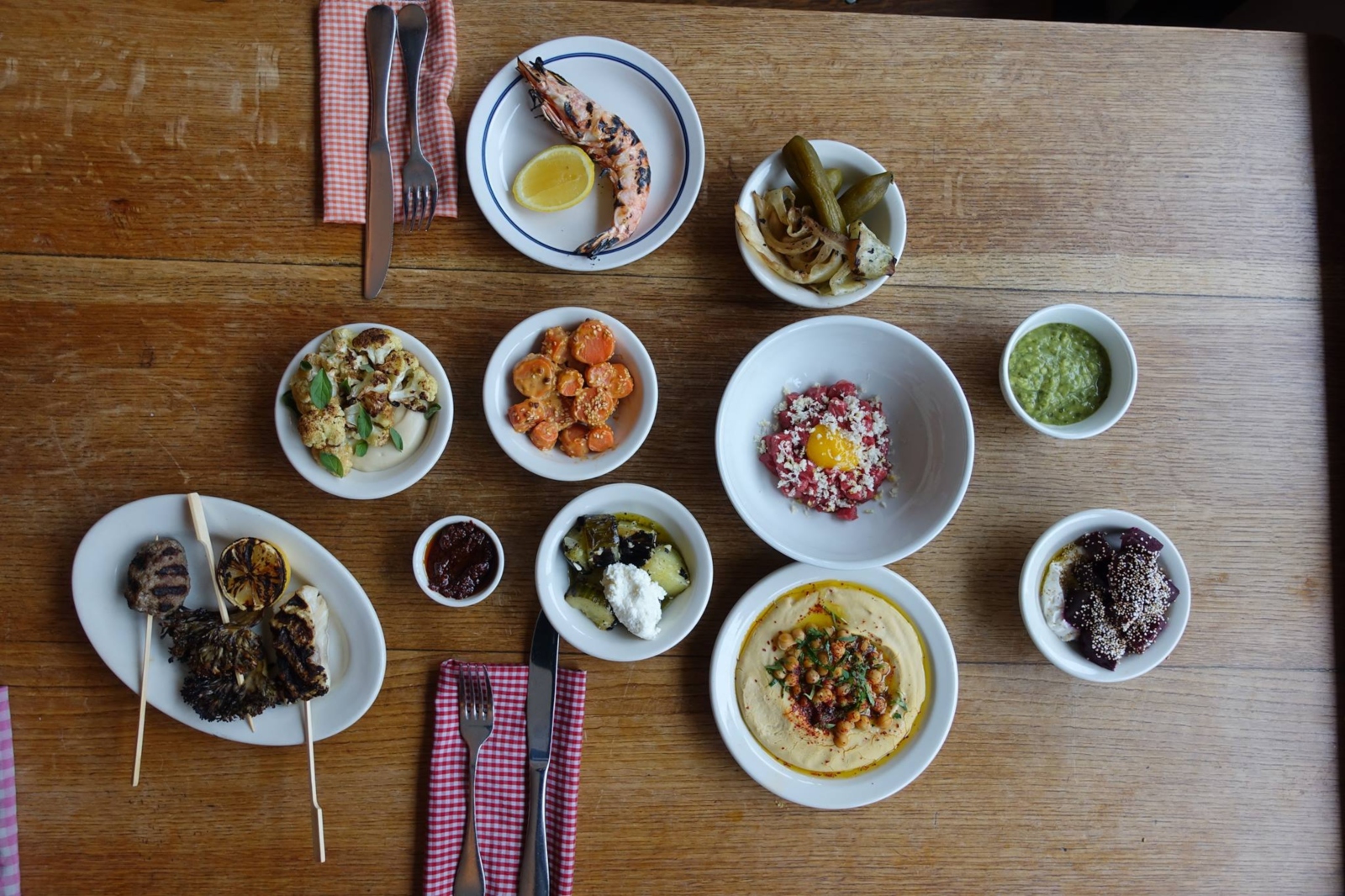 12 Chairs is a Brooklyn institution serving traditional Middle Eastern/Israeli food, and many ingredients are flown in directly from Israel. Yes, there are more than 12 chairs. Yes, they serve alcohol — an extensive collection of boutique Israeli wines.

Shalom Japan is where Jewish and Japanese cuisine meet. This is the type of place you can only find in Brooklyn. We like the sound of the lox bowl, sake kasu challah with raisin butter, and tuna tataki with black tahini. 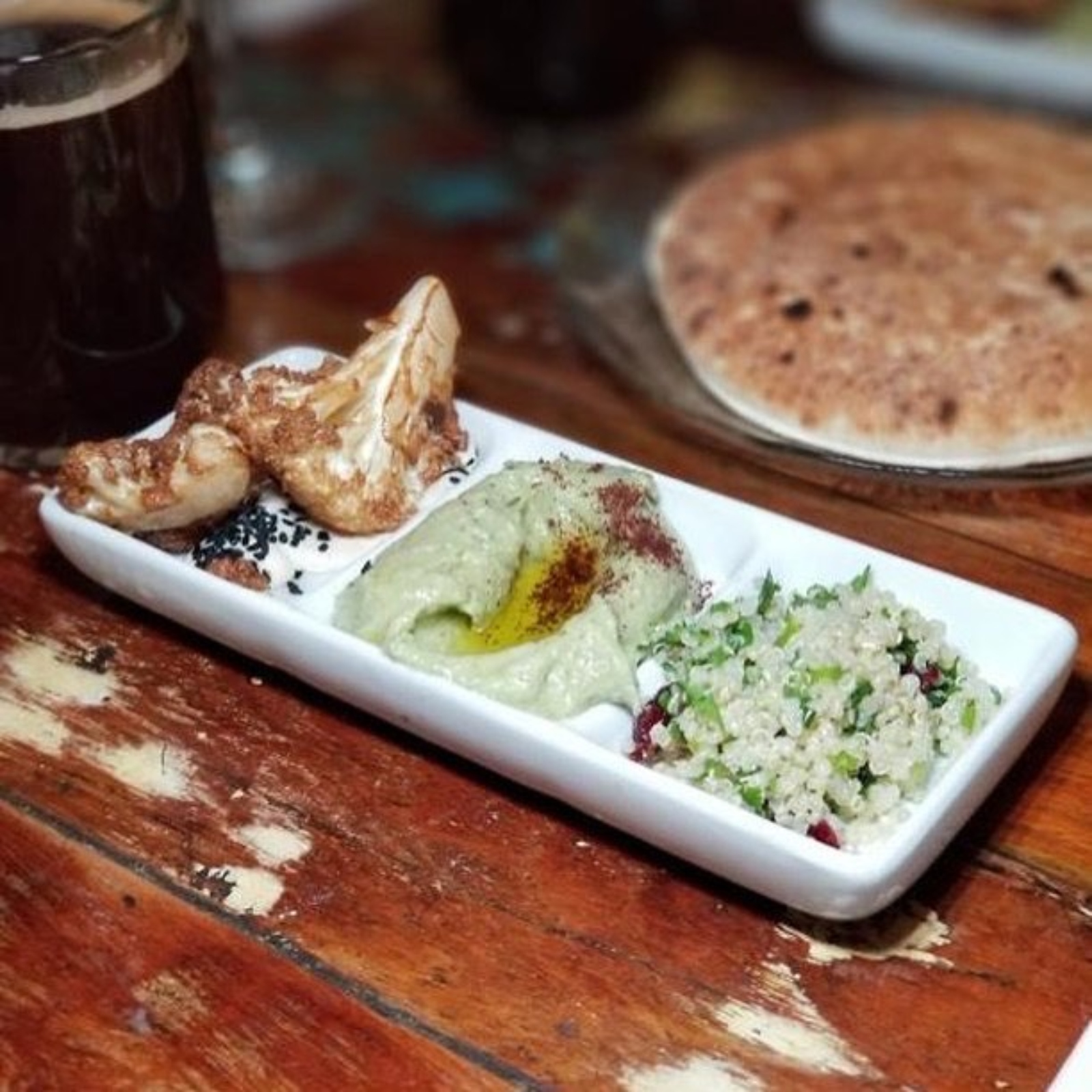 A brunch dish of quinoa, babaganoush and cauliflower at Zizi Limona. Photo via Facebook

Zizi Limona’s chef, Nir Mesika was born to a Casablanca native and raised in Israel. Zizi Limona brings Israel, Morocco and Italy together for a fun dining experience transcending continents. Do not skip the Turkish coffee. Order a bunch of platters to share or the tapas selection

Miznon epitomizes the Tel Aviv food scene: creative and boisterous. Everything comes in a pita garnished with an elegant and minimal green onion stalk. 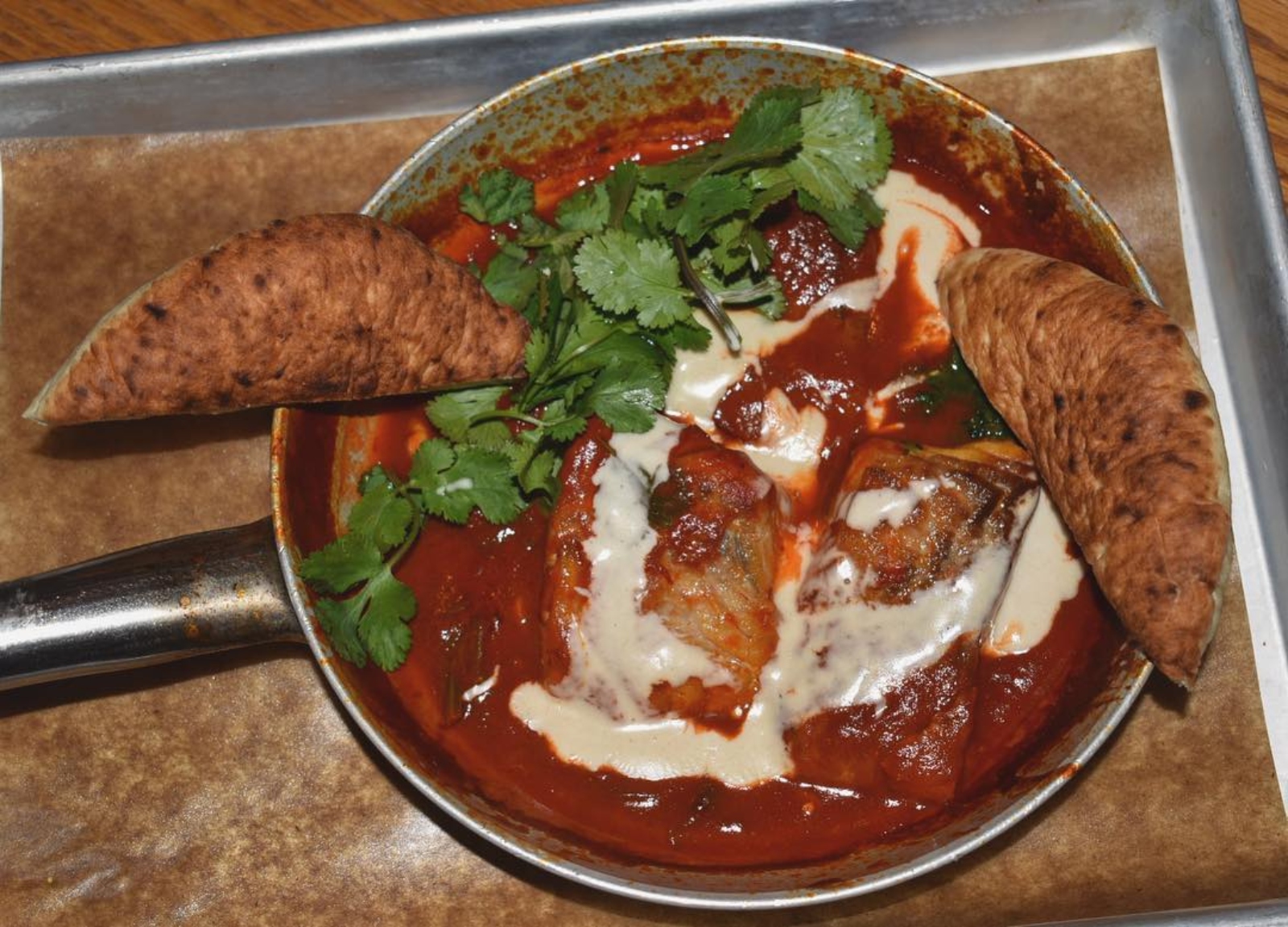 HaSalon is proof that Eyal Shani is taking NYC by storm. First he expanded his everything-in-a-pita Miznon empire up north, and now he brings an experiential food ceremony from Tel Aviv to Hell’s Kitchen. Shani’s philosophical food journey is all about the tomato: what is it and where can we take it? For answers, check out @eyaltomato or even better, visit HaSalon. We hear Shani is opening another branch soon!

Nur is a high end gastronomic experience in Gramercy. Reservations are hard to come by so plan ahead. Definitely order the Casablanca chraime and date doughnuts.

Breads is an international branch of the successful Lechamim bakery in Tel Aviv by bread pioneer Uri Scheft. Breads has the best babka in the city and my all-time favorite almond croissant. Come for coffee and a pastry, or pick up a cake for an indulgent weekend dessert.

Kish-Kash is Einat Admony’s newest venture to join the scene. It focuses entirely on North African couscous in a light and airy West Village space full of colorful tiles that will brighten your mood. Be adventurous and try the mafrum; it pairs well with the rosewater-and peach-sangria. Also visit Admony’s recently reopened Balaboosta restaurant. 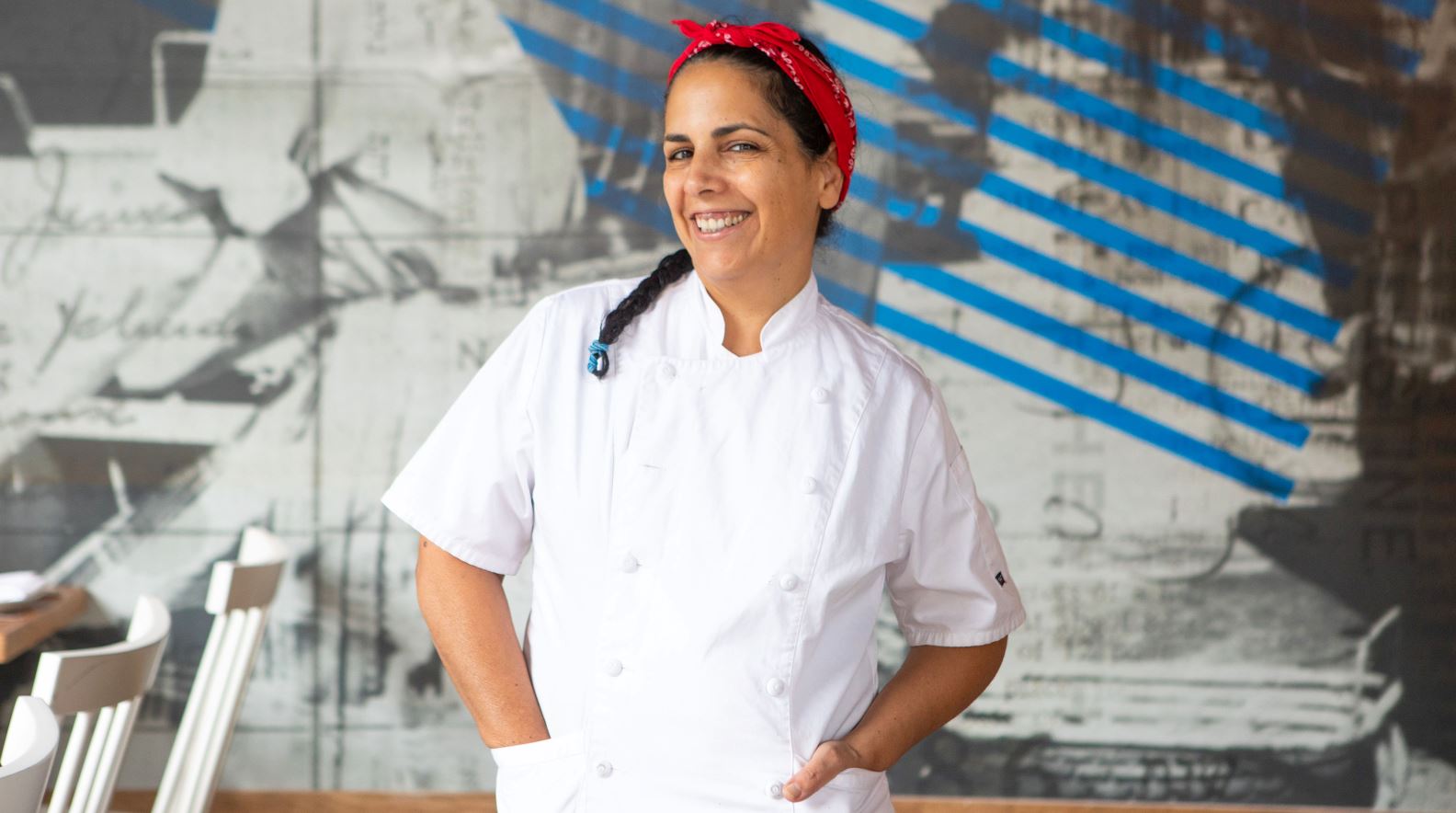 Clover Café and Clover Grocery provides a local and chic café and health-food store. Come for brunch or stop for sustainable and local produce and ingredients. Leigh Ofer, one of the owners of Clover, also runs an incredible organization called Seed Street, which leverages hydroponic farming tech to sustain urban food-desert communities in Harlem.

Gotan is a casual Israel-owned café with branches throughout Manhattan and one in Brooklyn. Gotan pays tribute to coffee culture and serves light and seasonal food with an emphasis on fresh vegetables.

Jack’s Wife Freda is a love story between a South African and an Israeli, bringing you elevated comfort food in a trendy and yet homey setting. Jack’s Wife Freda has a loyal and devout customer base and is perhaps the first hip brunch place to bring Israeli-inspired food to the masses.

Claudette near Washington Square Park features a fusion of French and North African/Israeli cuisine served in a bright corner space with an elegant cottage feel.

Daniella Lang  identifies as a Tel Avivian living on the Upper West Side. Currently a student at Columbia University, Daniella is passionate about the Israeli food scene and its broader implications on Levantine culture and society. You can also follow her food adventures across the globe @buddhandbelly.