Fabulous anytime, Tel Aviv has extra appeal for tourists this year as it celebrates its 110th anniversary.

Tel Aviv is a fabulous city, and 2019 promises to be a particularly fabulous year for it. Important milestones, cultural events and all-round amazingness make the seaside city a must-see this year. Here are our top picks for what to do and enjoy. 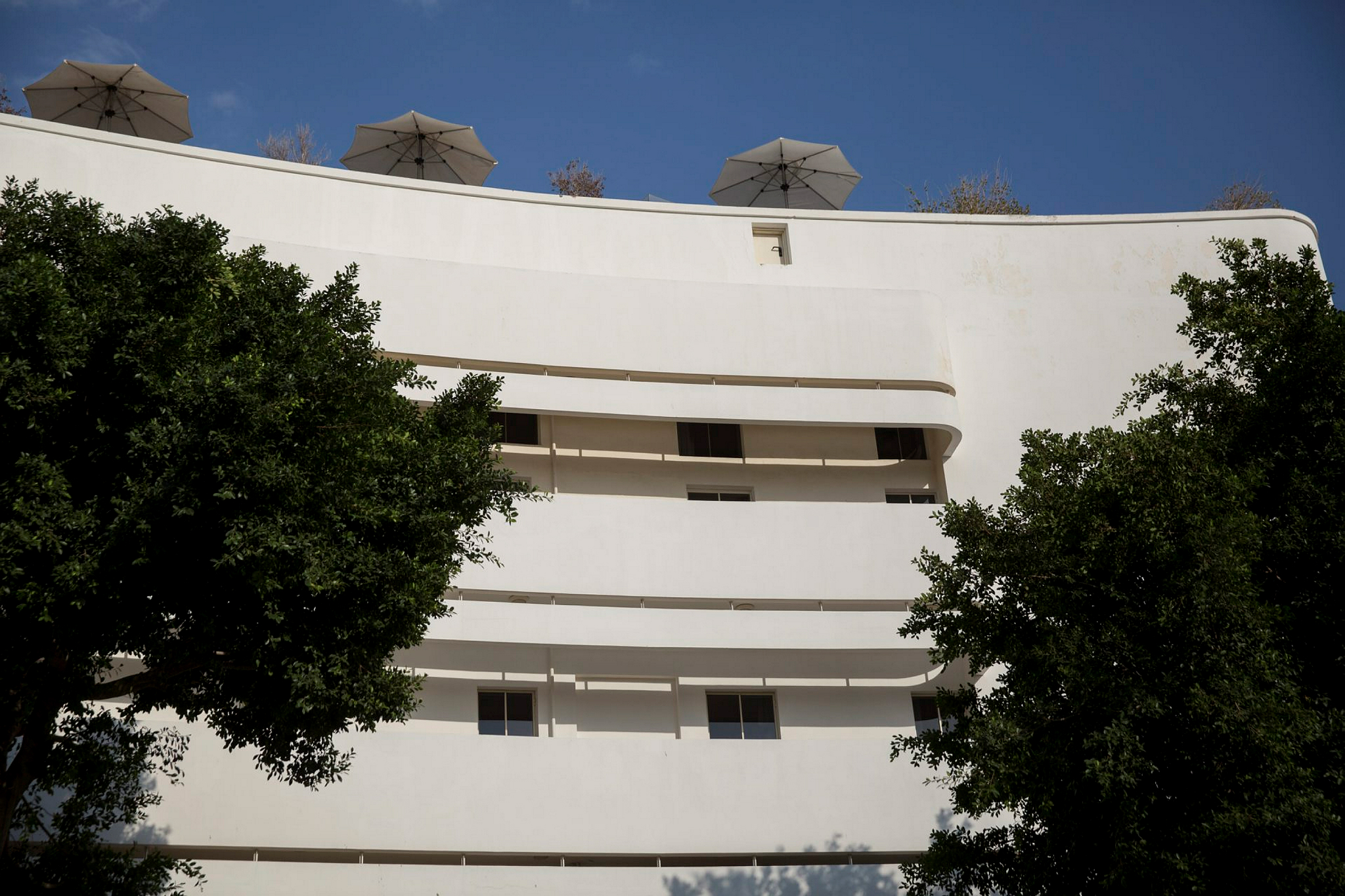 The Hotel Cinema on Dizengoff was built in the Bauhaus style by architect Yehuda Magidowitz in 1930. Photo by Miriam Alster/Flash90

Tel Aviv isn’t all sea and sun, but also a universally recognized architectural gem. Its White City area is a UNESCO World Heritage Site thanks to its 4,000 buildings constructed in the Bauhaus architectural style now celebrating its 100th year.

Bauhaus, more correctly known as the International Style, was developed in the Bauhaus school in Germany that operated from 1919 to 1933. The rise of the Nazi Party led many Jews, architects included, to flee to Mandatory Palestine, where they built in the young city of Tel Aviv thousands of buildings in the decidedly modern style.

Walk around the city with the Bauhaus Center’s self-guided audio tour, or join one of the center’s special tours celebrating 100 years of Bauhaus, to learn all about the beautiful buildings with their curved corners, generous balconies and asymmetry. 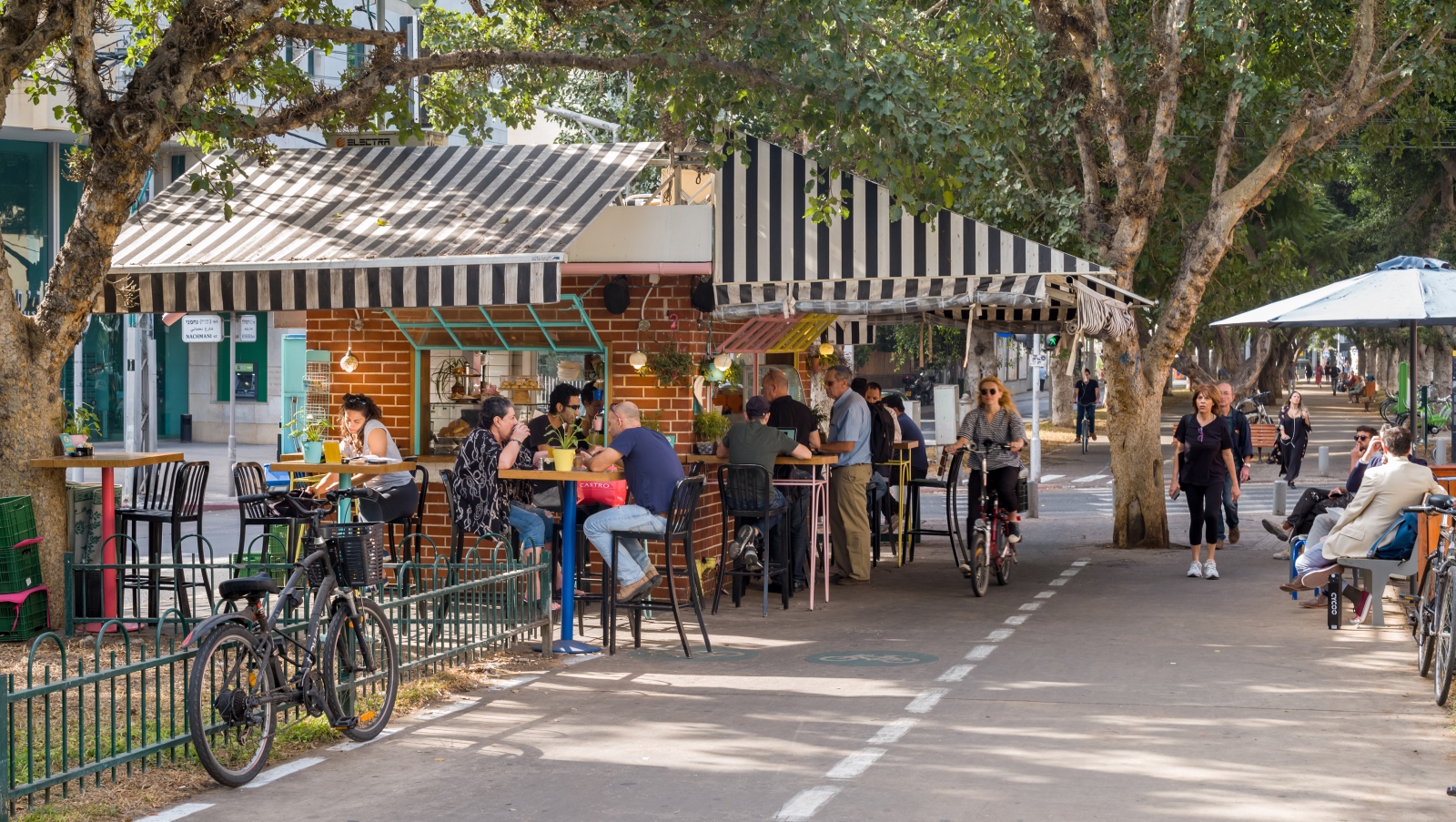 Upscale Rothschild Boulevard was once the sand dune where Tel Aviv started. Photo by Boris-B via shutterstock.com

Sure, there are definitely more historic cities in Israel than Tel Aviv. After all, what could possible compete with Jerusalem? But Tel Aviv, which this year is celebrating 110 years, has a fascinating history of its own.

It all started with a seashell lottery, when some 60 Jewish families gathered on a sand dune on April 11, 1909, and divided plots of land between them using colorful shells. That sand dune, by the way, is now Rothschild Boulevard.

The boulevard and the surrounding streets house some of the city’s most beautiful historical sites. Check out Independence Hall to see where the State of Israel was declared, or the castle-like Bialik House, home of national poet Hayim Nachman Bialik, now a museum of his work and a cultural center. 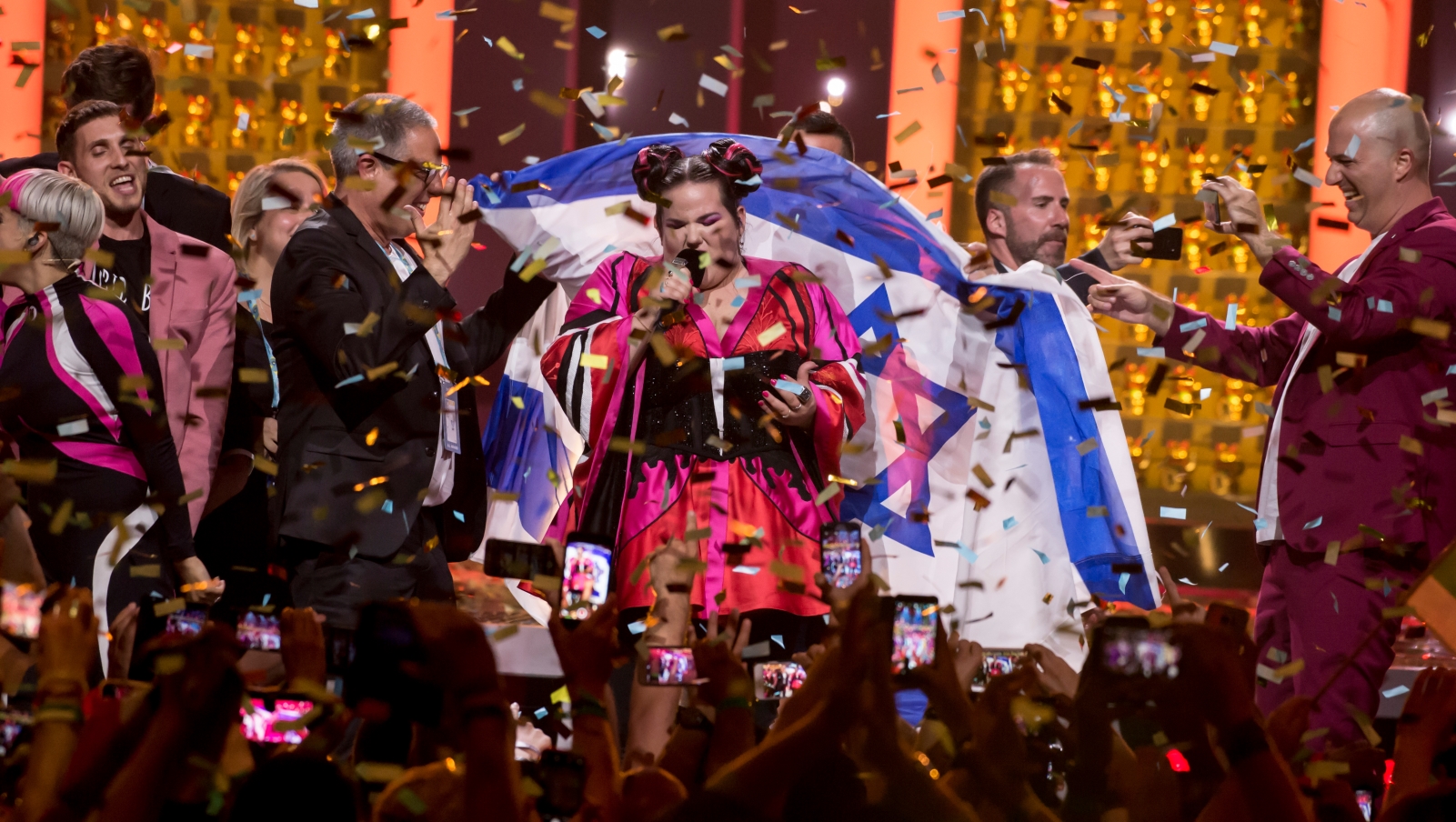 Israelis are very, very serious when it comes to the Eurovision Song Contest. Last year, the nation’s dream came true when the fabulous Netta Barzilai won the contest with “Toy.”

That’s why Israel gets to host the 2019 contest, which will take place in Tel Aviv from May 14 to 18. The city is gearing up to host the thousands of music fans expected to come for the competition, even setting up a camping site in the city’s Yarkon Park to accommodate them.

Tel Aviv is a super-fun place all year round, but the Eurovision bonanza promises to make mid-May an exceptionally fantastic time to visit. 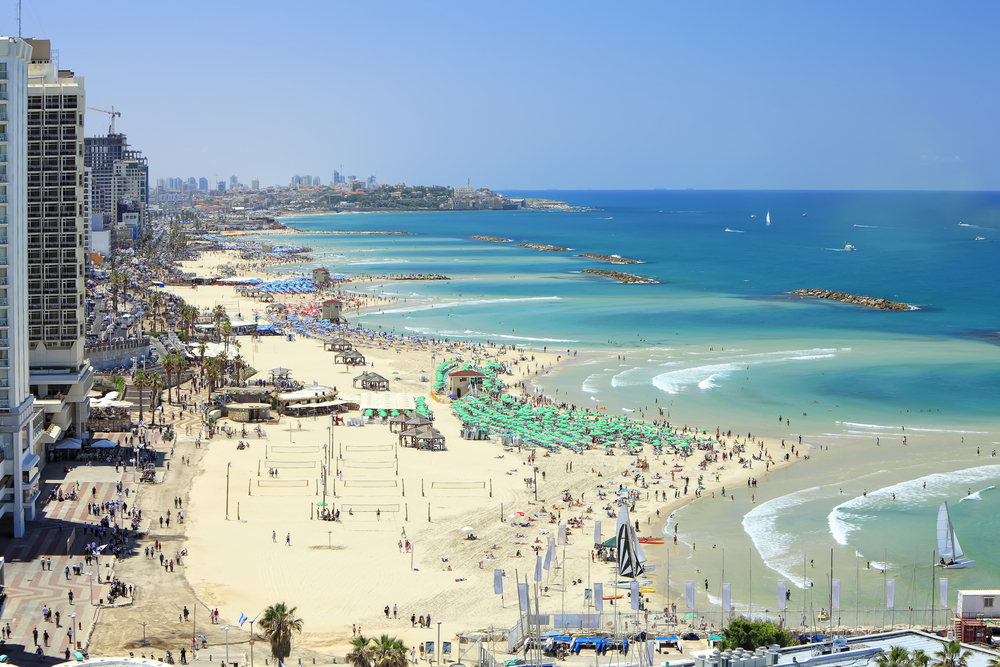 Tel Aviv beach in all its glory. Photo by shutterstock.com

In true Mediterranean style, the entire length of Tel Aviv is bounded by the sea, making the beach the #1 attraction in the city from mid-spring to mid-fall.

All 13 of the city’s beaches are public and free, and offer a wide variety of seaside experiences.

Whether you want to get some surfing in, relax family-style or hit the LGBT community’s favorite sands, Tel Aviv has it all. Our top spots include Hilton and Gordon beaches for their young, sporty vibe and Charles Clore Beach for its relaxed and dog-friendly atmosphere.

Don’t be surprised if complete strangers ask you to watch their things while they go for a dip. Just beware of matkot, a seaside paddleball game that inevitably ends up ricocheting balls all over.

For those less inclined to get their feet sandy, the seaside promenade running along the coast is a scenic spot for relaxation, strolls and a pleasant cycle. Grab a bicycle, a beer or a green shake and watch the world go by. 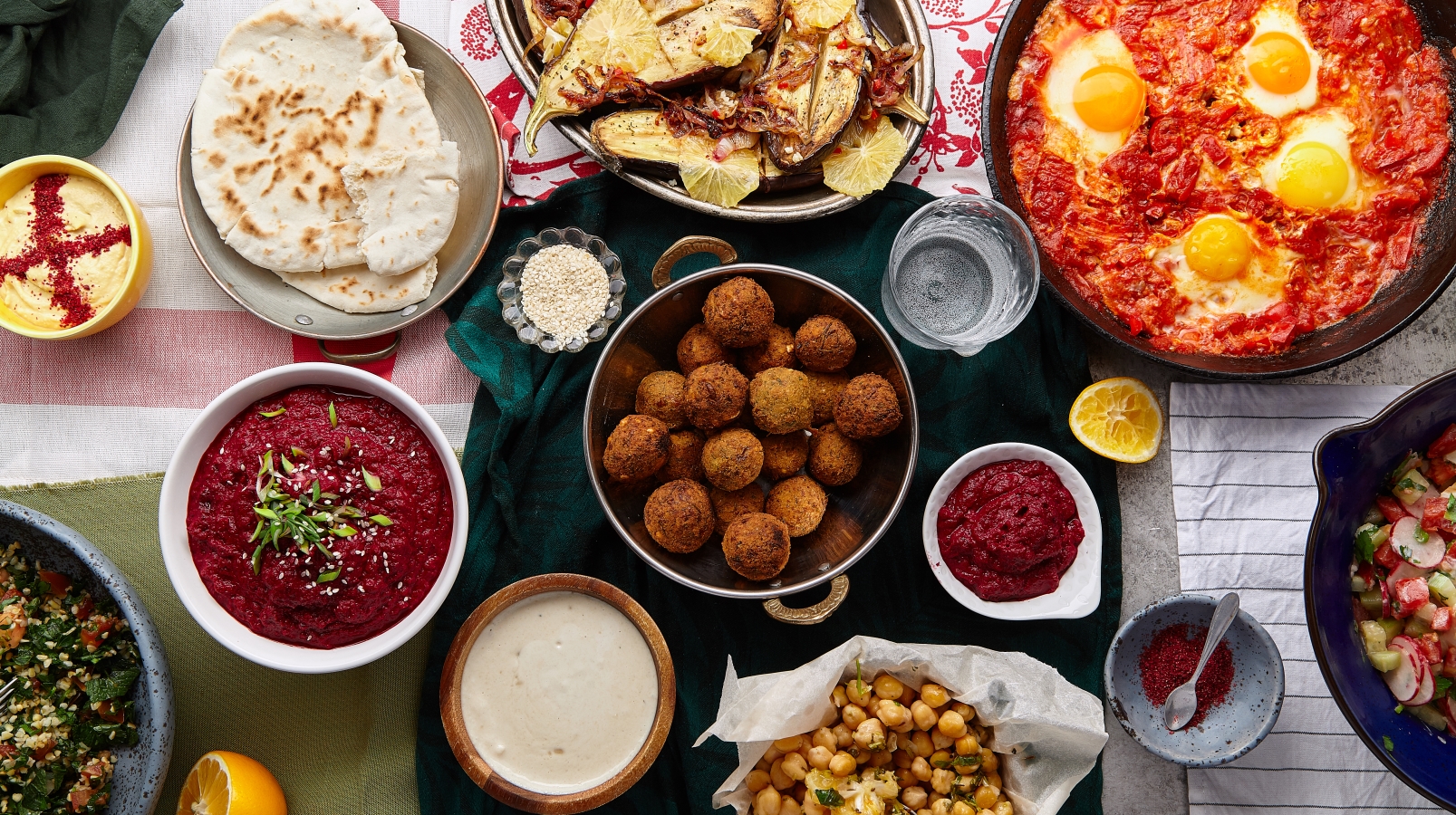 Tel Aviv is a food mecca for Middle East fare as well as international cuisine. Photo by Asya Nurullina via shutterstock.com

In one word: Yum. In two: Yum yum. Israel is world-famous for its delicious food, and there’s probably no better place to devour it than Tel Aviv.

Moroccan, Yemenite, Iraqi, French, Italian, Spanish, Georgian, Indian, Thai, Chinese –just name it, and you can enjoy it in Tel Aviv. From family-run joints to super-fancy chef restaurants, the city boasts dining experiences to suit all tastes and budgets.

Vegan visitors need not worry about going hungry. Tel Aviv is “vegan capital of the world” for good reason. In addition to superb vegan restaurants, soy and almond milk are de rigueur across the city, as are plant-based dishes on non-vegan menus. Of course, hummus and falafel are vegan by nature. 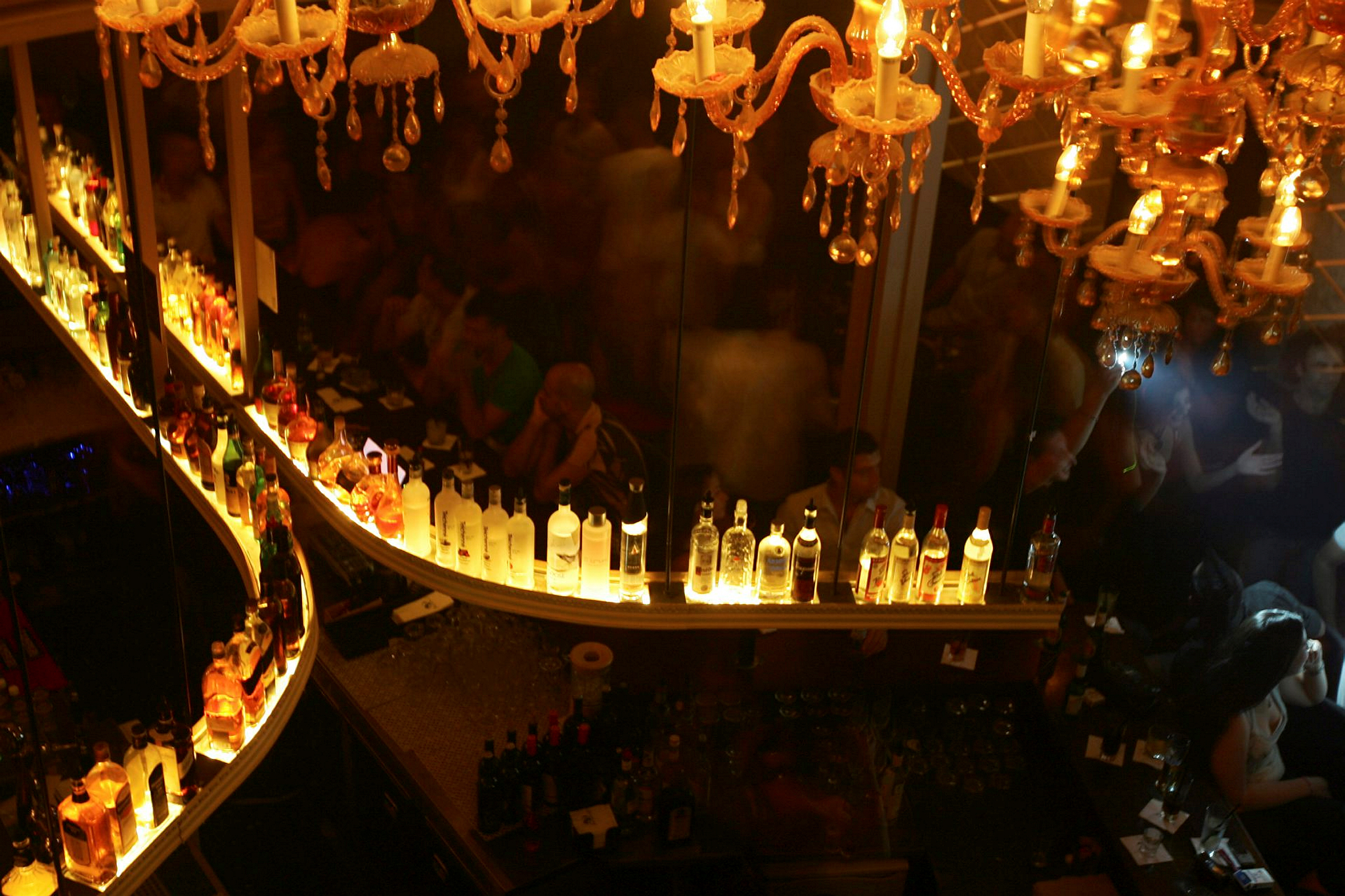 A bar in Tel Aviv. Photo by Kobi Gideon/Flash90

Tel Aviv is definitely Israel’s most fun city. All-weekend parties, generous happy hours and a huge young and hip crowd all make the city the perfect place to let your hair down.

Those interested in hardcore partying will do well to head to the city’s south to try out The Block and Alphabet, two of Tel Aviv’s hottest clubs. For those more inclined to spend the night sipping superb cocktails, may we recommend the Imperial Craft Cocktail Bar, named the best bar in the Middle East and Africa.

Despite its global success, the Imperial still offers an excellent happy hour, as is customary throughout the city. Other places also have generous discounts in the early evening, so get out on the town early for the full experience. 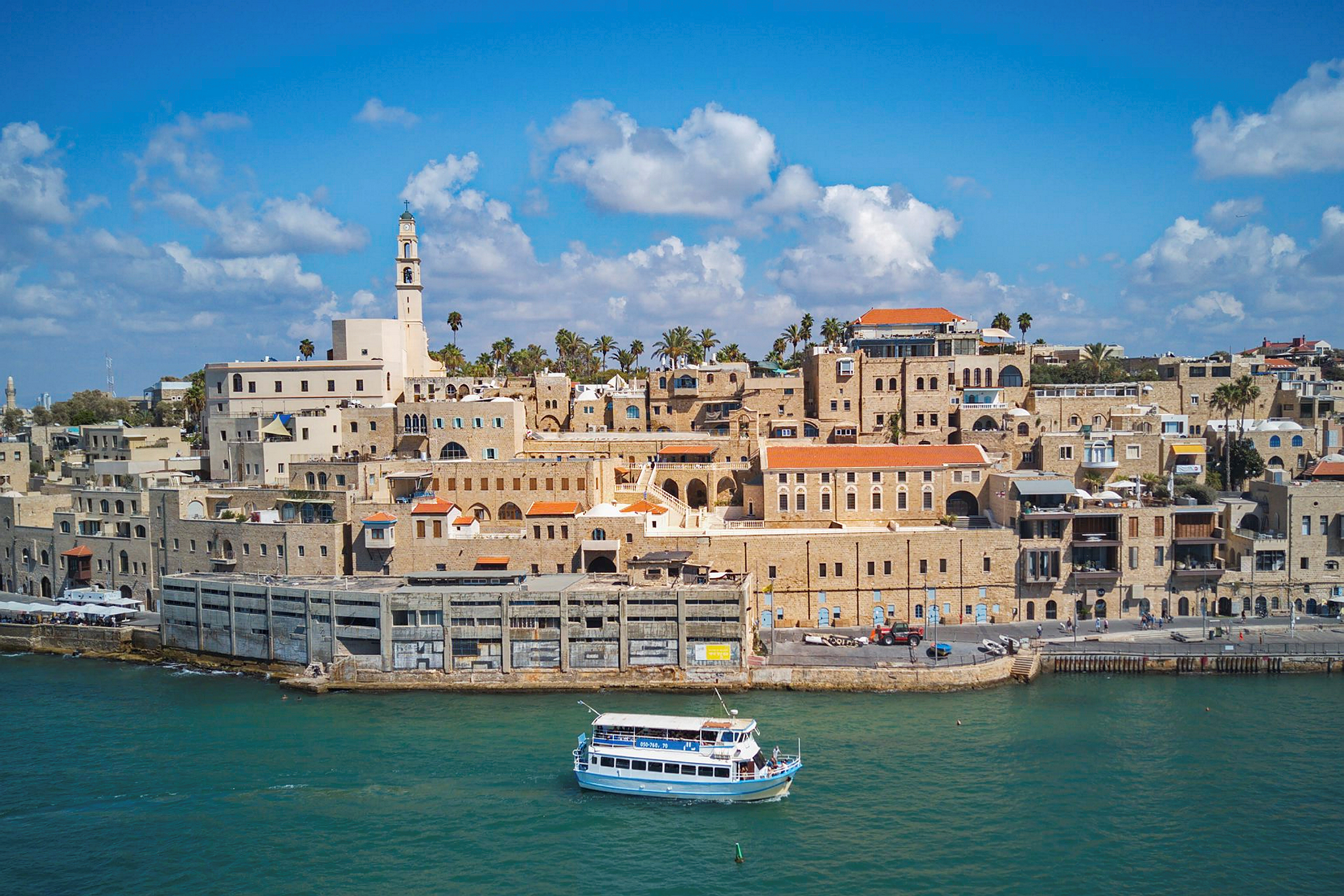 Jaffa captured in a drone shot. Photo by Menachem Lederman/Flash90

Yes, Tel Aviv has an impressive, if brief, history. Nearby Jaffa, on the other hand, has seen it all: Jonah the prophet (think Jonah and the whale), Roman soldiers, Crusader conquerors, Islamic rule and British soldiers.

Jaffa officially merged with the Tel Aviv municipality in 1950. Today, it’s the perfect place for a historic stroll and achingly hip culture. Home to both Arab and Jewish communities, it’s also a prime example of Israeli coexistence at its best.

Head to Jaffa Port for stunning seaside views before making your way to the local flea market, which nowadays is home to excellent restaurants, cafés and bars as well as the traditional bric-a-brac. Enjoy delicious local food in a gorgeous outdoor setting at Puaa or innovative drinks in beautiful company at Ramesses. 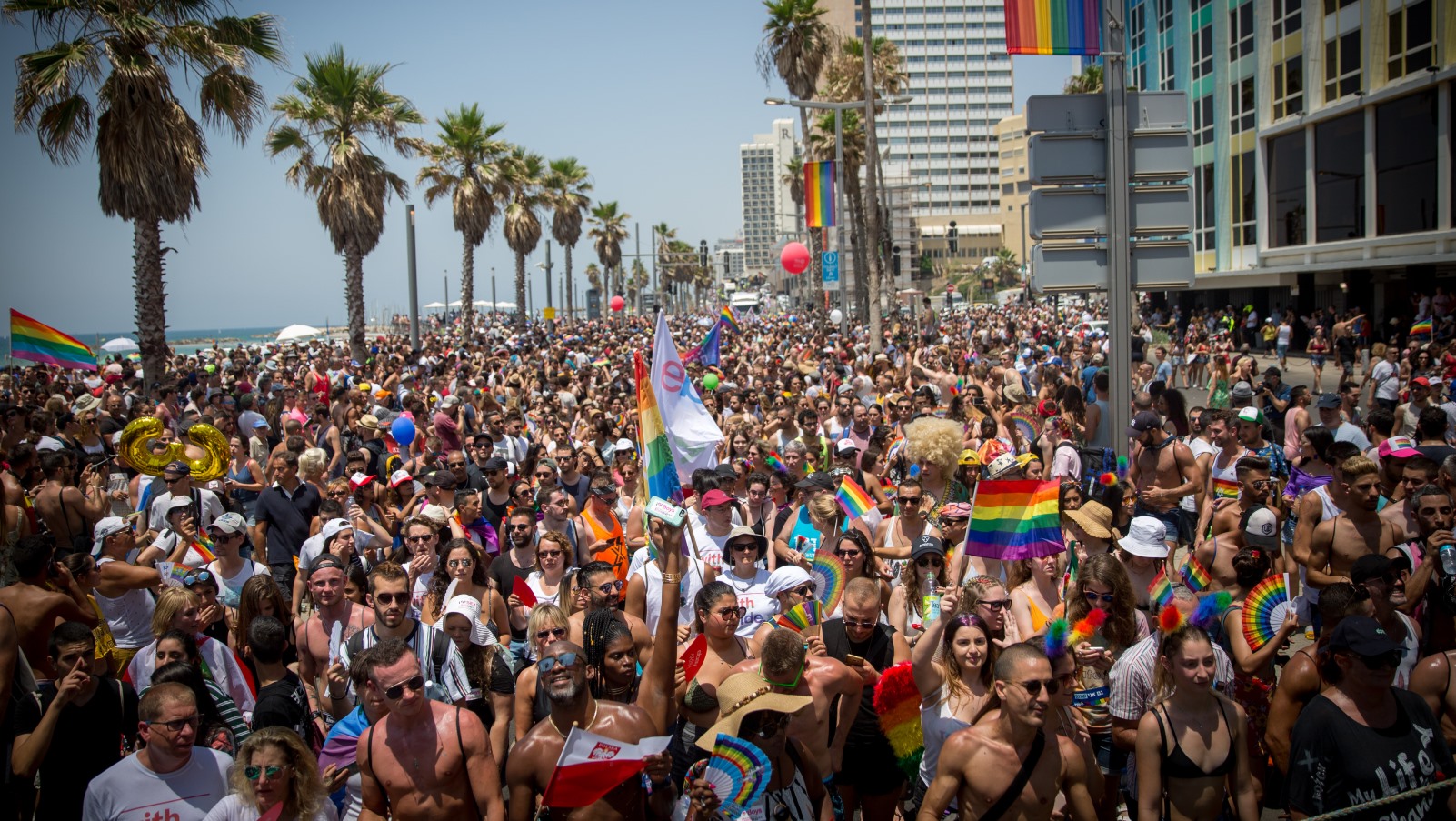 One of the city’s most celebrated events, the Tel Aviv Pride Parade is set to take place this year on June 14. On this day, much of the city’s and Israel’s LGBT community is joined by other locals and visitors to celebrate love, acceptance and diversity in a festive parade that culminates in a giant beach party.

Tel Aviv is a thoroughly gay-friendly city and is widely considered the LGBT capital of the Middle East. The Pride event draws thousands of people from Israel and abroad, and includes people from all walks of life. Make sure to bring a hat and a bottle of water with you, since the event really is one of the hottest ones around. 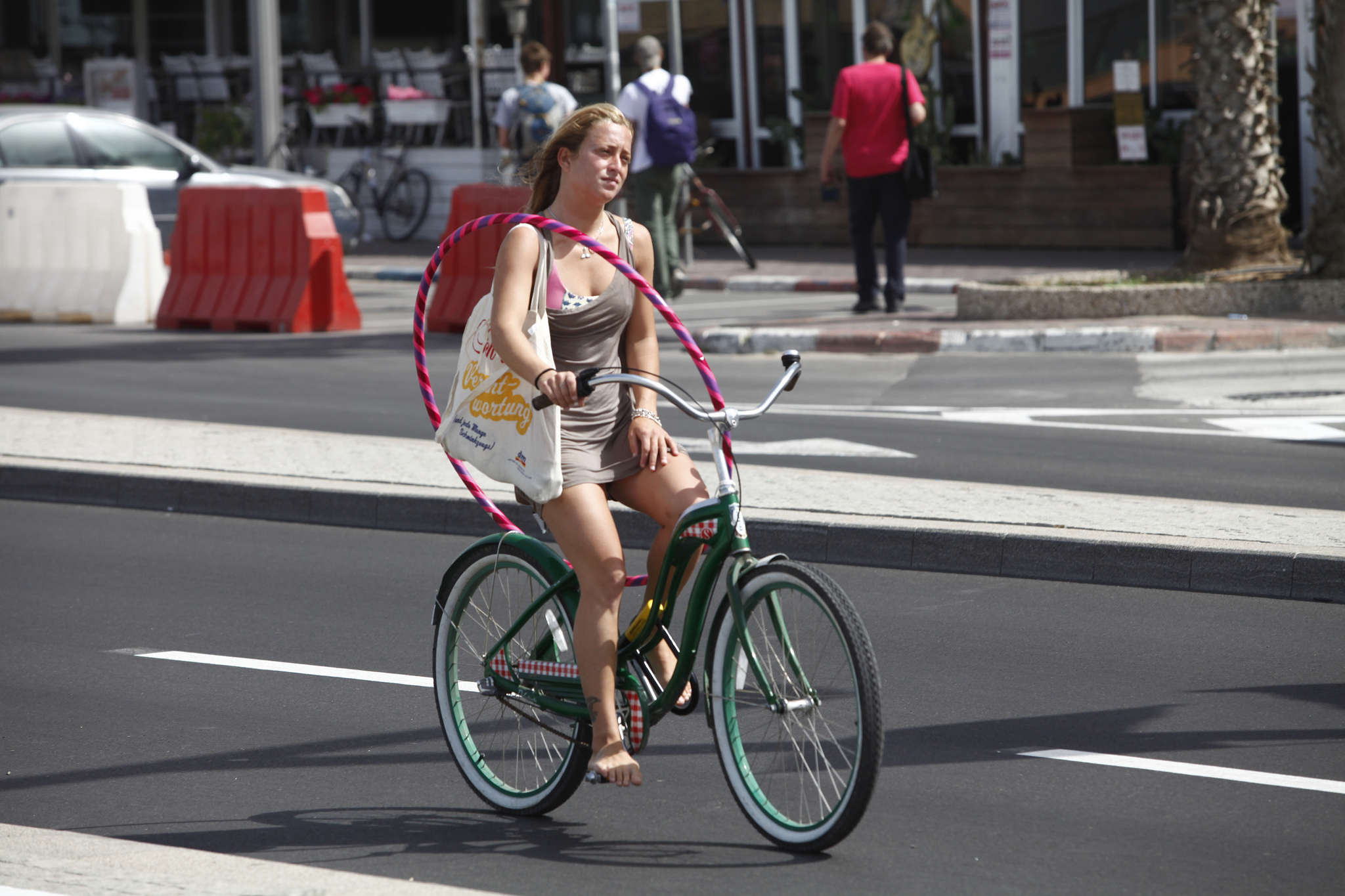 Ready for the beach. Photo of a girl cycling in Tel Aviv by Ariel Jerozolimski

Speaking of hot, Tel Aviv enjoys beautiful weather almost all year round. The summer months regularly reach scorching temperatures, but with a bit of luck you’ll also be able to bask in the sunshine in the most wintery of months.

There’s no overestimating the influence the weather has on the city. From the fun little outdoor kiosks dotting the promenades to the runners and cyclists flooding the pavements, locals certainly know how to have fun in the sun.

Join them in cafés or rent some bikes to enjoy the city’s great outdoors. And don’t be too shocked by the half-naked people making their way from the beach back to urban civilization. 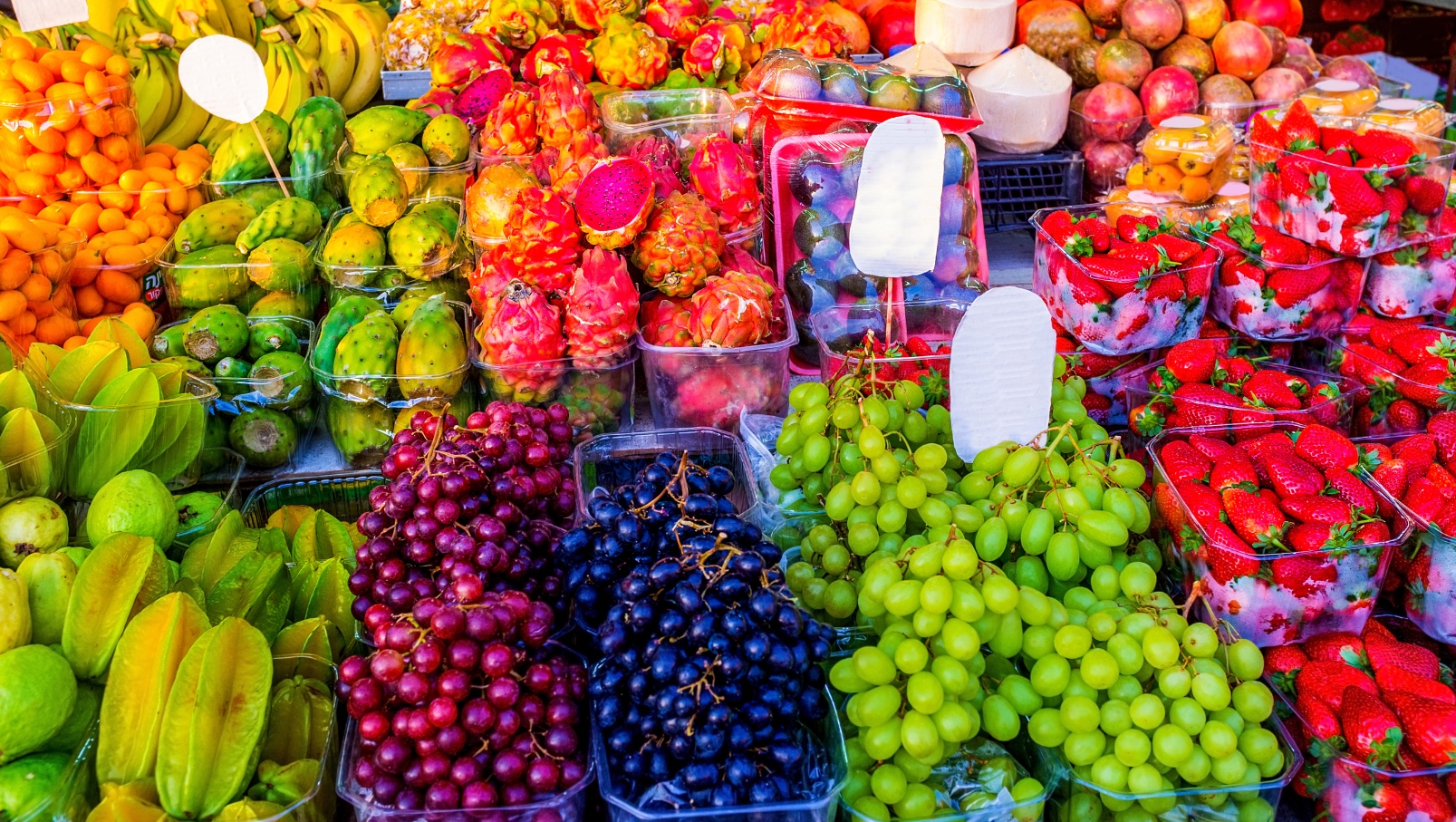 Fresh fruit at a Carmel Market stand. Photo by eFesenko via shutterstock.com

Last but not least, Tel Aviv’s markets are real foodie gems that give visitors a glimpse of local Mediterranean life.

There are three main markets in the city: Carmel, Levinsky and Sarona. Carmel is probably the best-known. Situated in the city center, it boasts the usual selection of fruit and vegetables along with toys, household items and souvenirs. There are also some really great restaurants, juice shacks and food stalls around the market – just wander along and nibble as you go.

Levinsky in the city’s south side offers a slightly more genuine and relaxed shuk experience. It was recently listed in Condé Nast Traveler’s “Best Antique Stores and Flea Markets,” and rightly so. This is the place to discover old-school spice shops with even more old-school owners, mostly of Persian, Greek and Balkan origin, who serve customers excellent spices, coffee and dried fruit.

The more upscale Sarona Market is a modern take on the urban market. Located in the beautiful renovated German Templer Colony, most stores are indoors, enabling visitors to enjoy it even in the (rare) rain. Grab a bite at one of the eateries onsite or shop for lovely housewares and gifts. Once you’re done, lie down on the grass outside with a coffee or an ice cream for a short break from your already fabulous stay in the city.