11 of the best places to eat burgers in Israel

Lately, hamburger restaurants in the Holy Land are following all the current Israeli food trends – “Just because it’s kosher doesn’t mean it can’t be delicious,” “Kosher, but looking and tasting like something very un-kosher,” and “Not even trying to be kosher,” among others.

As toppings start becoming more like an experience in gastronomic customization, and with restaurants touting house-made sauces and decadent toppings, Israeli burgers have gone gourmet casual, and aren’t looking to turn back anytime soon.

Here are 11 burger joints that blow McDonalds out of the water, and usher in a new era of the Israeli hamburger. If you have a favorite, tell us in the comments below. 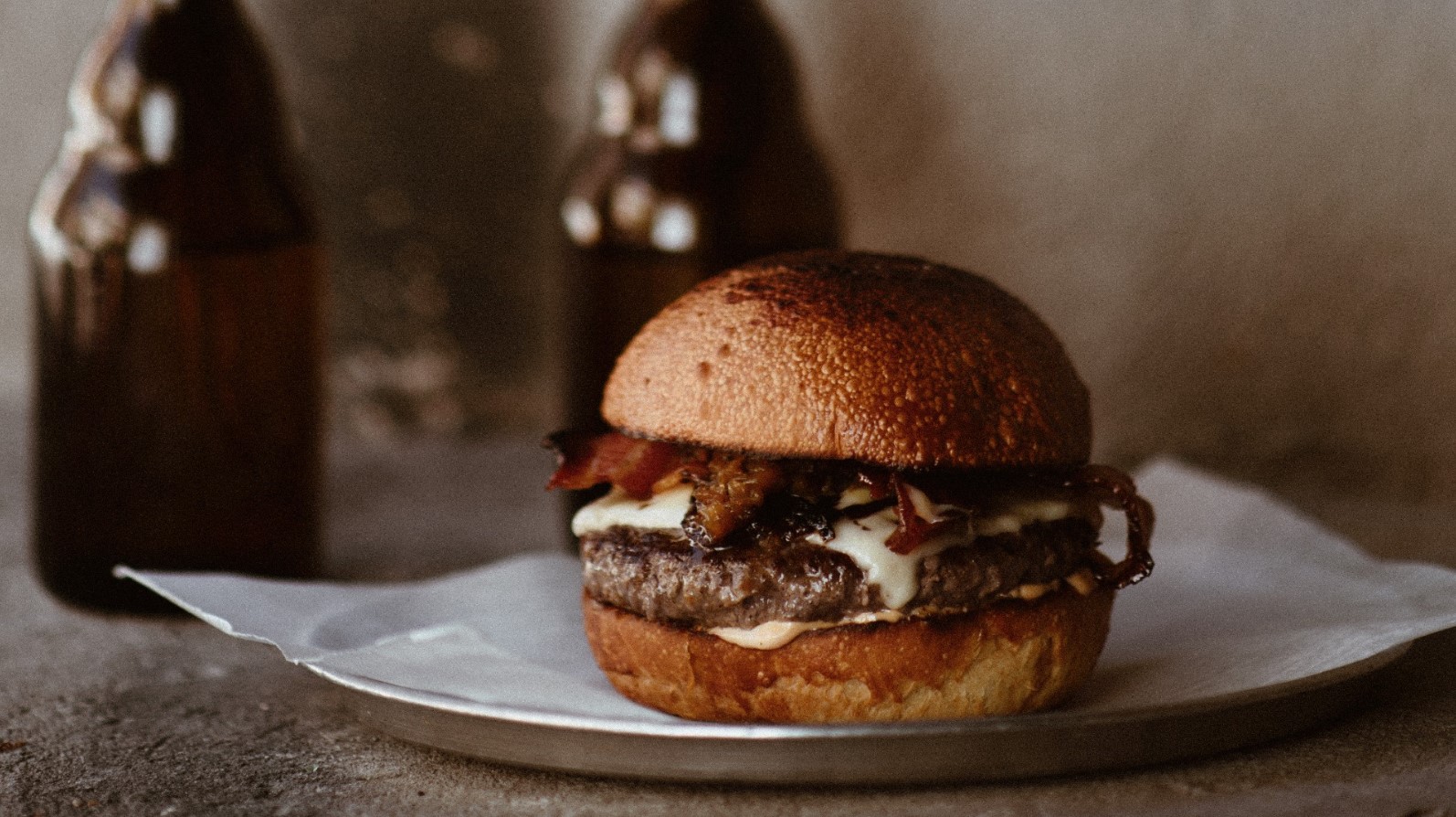 The burgers at 26 Hamburger Gourmet are served with French panache. Photo: courtesy

But the real genius is how Benarouche and her team bring the South of France to Israel with little touches one doesn’t typically see in a hamburger joint, such as fresh flowers in vases, fancy plated classic desserts, and French bistro-style fries in stylish tin buckets.

For kosher foodies looking to get in on the burger trend (which tends to lean on the side of not-kosher with its bacon adornments and cheesy toppings), Memphis, started by born-again Jew, former restaurant critic, food writer and stand-up comic-Ori Melamed, is an excellent choice for a well-seasoned high-quality burger.

Served up with topping choices like a runny-yolked sunnyside-up egg, in-house smoked duck breast and entrecote steak, the patty itself is a blend of four different cuts of meat proudly perfected by Melamed, Chef Amir Ilan and famed “steak whisperer” George Avdu.

Get your burger at its Jerusalem location next the Machane Yehuda market on Agrippas Street, or on Carlebach Street in central Tel Aviv. Be sure to get the delicious crinkle fries and homemade dipping sauces to go with. Emerging on the scene over 10 years ago as Haifa’s first craft brewery, Libira in Haifa’s old port area is so much more than just a place to down a beer. On the menu curated by local chef Roy Avraham are four outstanding burger choices that easily match some of the best in the country.

Enjoy the loft-like industrial atmosphere that the renovated shipping storage house interior provides, while you sip on the pub’s popular dark smoked stout or light summery Weiss beer. Chow down on the Yana Burger topped with Camembert cheese, bacon and smoked cherry sauce; or the Libira Burger, which features lamb bacon, Emmental cheese, chimichurri sauce and a beer-battered onion ring. 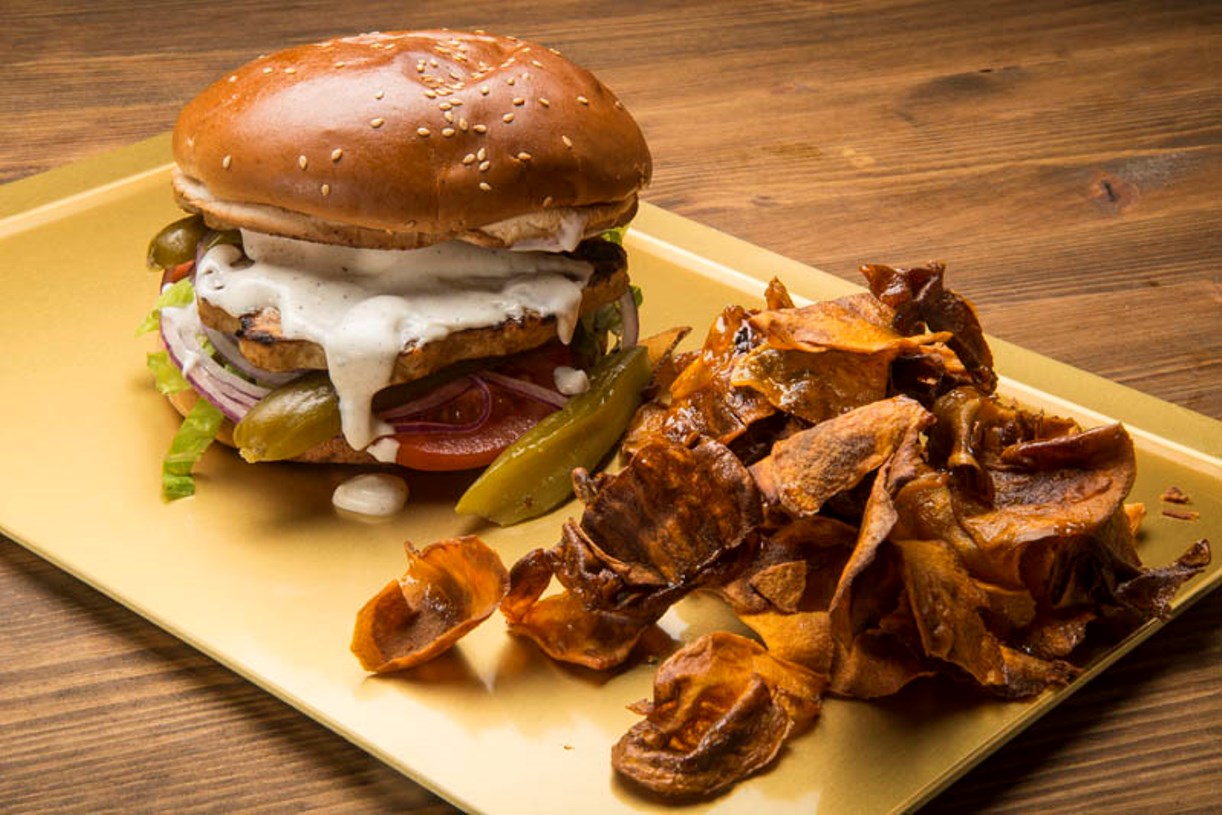 A stacked burger and sides at Josef Burger, Jerusalem. Photo by Sivan Shuv-Ami

Opened in 2013 by the owners of the famous “Haztot” (midnight) steakhouse — a Jerusalem establishment of 40 years– as a place designated for making and selling great hamburgers, Josef Burger offers up outrageously “fearless” burgers stacked stories high with toppings such as grilled pineapple, guacamole, juicy goose liver and Merguez sausage.

You can get a regular-sized burger of many different varieties as well, all made with prime cuts of meat and Josef’s special seasoning mix. And you can even get a pile of American-style chicken wings with chili, soy, and honey dipping sauce, herbed stuffed Portobello mushrooms, or even a hamburger salad.

A restaurateur from Teaneck, New Jersey, Tzvi Maller made a splash in the Machane Yehuda market dining scene when he and three friends — Chef Todd Aarons, James Oppenheim and Yoni Van Leeuwen — opened up Crave gourmet street food a year and a half ago.

Named for the forbidden non-kosher foods that these pious Jews couldn’t have, Crave is known for putting out one of the best “bacon cheese burgers” in the country, using house-cured lamb bacon and vegan cheese.

Not just imaginative, Crave is at the forefront of the kosher bacon movement, and embodies many philosophies in its internationally inspired street-food menu — number one, offering high-quality fast food whose elements have been slow-cooked either in-house or by nearby artisans; utilizing the freshness of the surrounding market; and discouraging tipping, preferring to pay servers a respectable salary instead.

Don’t hit this trending restaurant without getting some Crave burgers in slider form with a side of chili cheese fries, and what the heck, a “Masada Sunrise” cocktail too, or maybe just a Coke float. And don’t forget to check out the non-burger options as well, such as Crave’s Reuben sandwich and baja fish tacos, which definitely won’t disappoint.

Known for the Humongous challenge that encourages diners to finish off a 5.5-pound hamburger and 1 pound of French fries in in under an hour (if you do so, it’s free!), this burger chain also sells burgers meant to be savored in a timely fashion.

Diners not looking for a challenge can get burgers stacked up to three patties high, in 10 varieties, and named after the countries and cities that inspired their flavor profiles.

And drinks are not to be forgotten here either. The special-made Ein Beck-style beer is produced for the restaurant by Israel’s Alexander craft brewery. For the younger crowd, or nostalgic adults, the restaurant makes Ben & Jerry’s ice cream shakes topped with whipped cream. 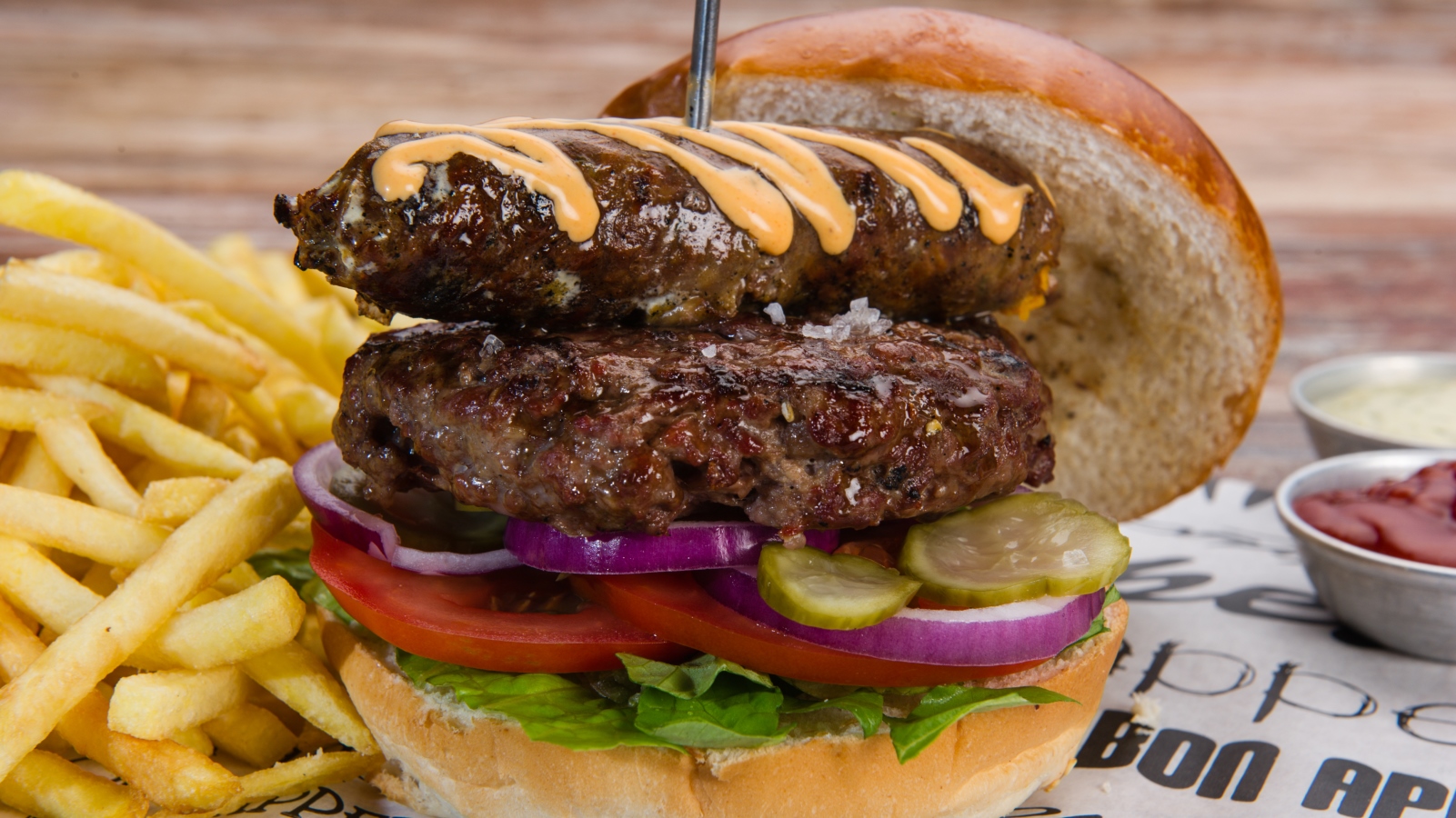 As chef-influenced as a burger diner can get, Chubby’s — which opened last year on the Netanya waterfront — is an upscale American-style hamburger joint led by chef Nadav Elbaz, who once worked at Derech Hagefen restaurant in Jerusalem’s Mamilla Hotel.

With sauces like amba aioli and truffle ketchup, and patties that can be stacked up three levels high, these are burgers not to be missed.

The restaurant has a whole menu of highly conceptualized burgers as well, such as Deep Forest, which features black truffle mayonnaise, mushroom ragout and crispy onions on a beef burger; and Dirty Harry, an herbed lamb burger with garlicky aioli sauce, crispy onions and sunnyside-up egg on top.

With options like these as well as a whole list of fun cocktails, this little Netanya restaurant is slowly turning into more than just a spot for the city’s residents these days, and it’s not hard to understand why.

Making its mark on the Tel Aviv burger scene since 2015, America Burgers offers only six choices for a reason, and that reason is they put out one damn good flame-grilled burger.

This is the place to go when you’re hankering for a double-decker cheeseburger dripping with ketchup and American-style mayo, a side of Southern fried pickles, and a beer-battered onion flower to go with your bourbon-and-sweet-tea cocktail. 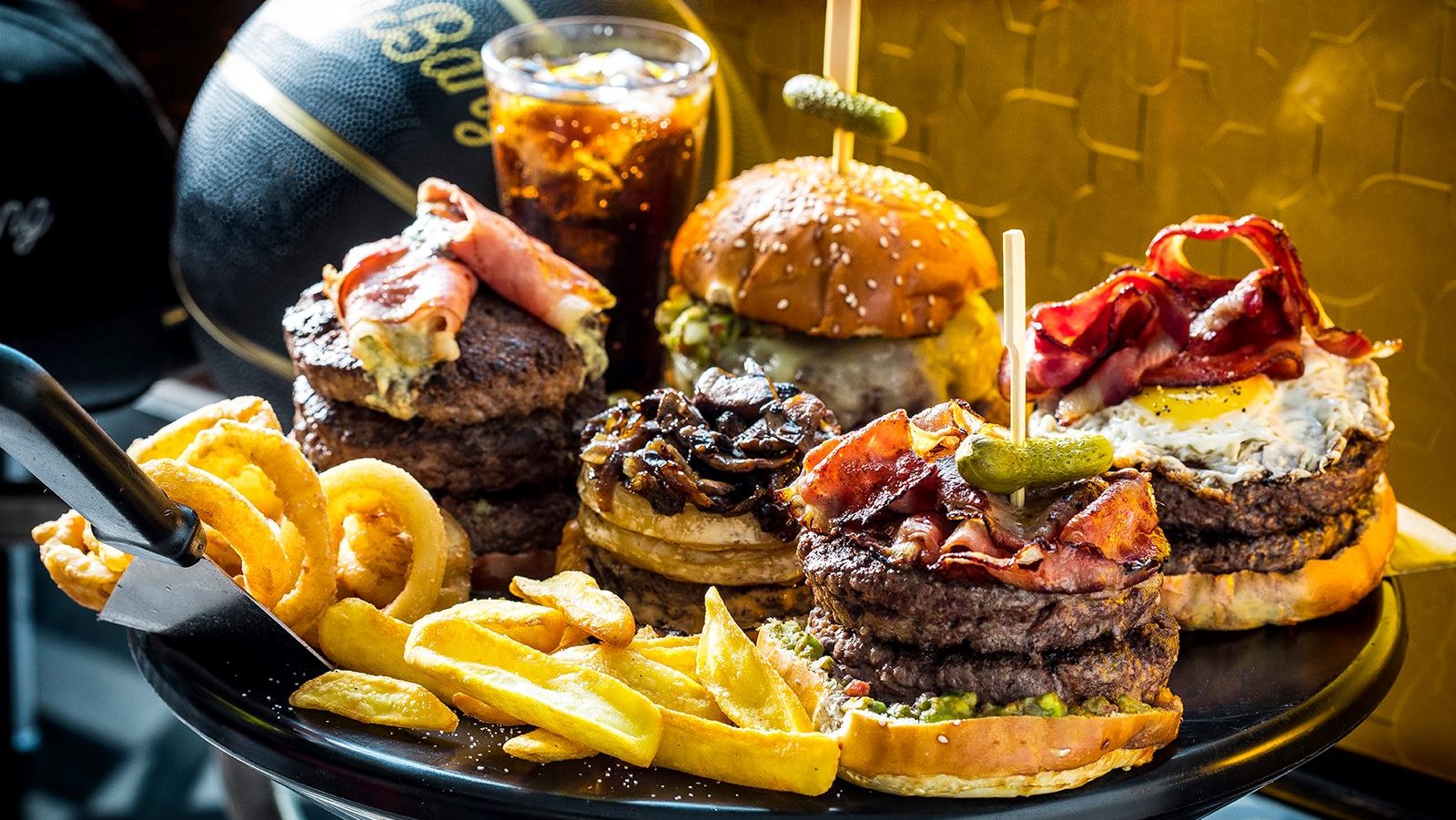 Another worthy addition to the ever-growing Ra’anana culinary scene is Bang Bang Burger. Build your own burger and top it with choices like creamy goat cheese, fried onions, veal pancetta, chorizo sausage, or gouda cheese with peppers.

With homemade onion rings to die for, and a variety of Ben & Jerry’s ice creams for dessert, Bang Bang is doing a bang-up job if you’re looking for a casual place to enjoy a burger, beer and the big game.

A delicious landmark in South Tel Aviv’s hipster Florentin neighborhood, Benz & Cocktails is a tiny bistro bar with some serious sandwiches, including a Benz classic burger to which you can choose to add onion jam or double bacon, among other delicious toppings.

Their motto is “With great food comes great responsibility,” proving to us that they take their job, and their homemade chili mint mayo, garlic fries, house-pickled onions, and homemade sausages seriously. Benz frequently hosts exhibitions to support the local street artists of the neighborhood, and of course is known for craft cocktails, the names of which draw inspiration from American pop culture and politics. And did we mention that they have churros for dessert?

Popular with the brunch crowd, R&R Diner is a rare non-kosher find in central Jerusalem. Although R&R isn’t exclusively a burger place, you can get an exceptionally dreamy burger here.

Check out monthly specials such as the June burger, topped with creamy chili sauce, grilled pineapple, and a bun speared with gherkin pickles; or the five layers of bacon cheeseburger yumminess; or the one topped with gobs of coleslaw, onion rings and good old cheddar cheese.