The sex manual for ultra-Orthodox Jews

Sex is a touchy subject – not least among Israel’s highly conservative ultra-Orthodox Jews. But a therapist in Jerusalem has written a sex guide aimed specifically at this community.

There used to be a sex shop on the way to Dr David Ribner’s office in central Jerusalem.

The sign is still there – with big red letters spelling out “Sex Shop, Sex, Love” – but you can barely read it because it’s been scratched out.

The shop went out of business. Now there’s just one sex shop left in Jerusalem. No surprise for a city brimming with the pious.

Things are quite different in Ribner’s discreet office. Here, there is a row of boxes packed with lubricants, vibrators and massage oils, and an unusual collection of books on the wall – The Joy of Sex and The Guide to Getting It On sit side by side with volumes of Jewish religious texts.

I tell Ribner I’ve never seen a bookshelf quite like it. “There probably aren’t any,” he says.

Ribner was born in the US. In New York, he received both rabbinic ordination and a doctorate in social work. Then he moved to Israel, where he has been counselling devout Jewish patients for the past 30 years. He also founded a sex therapy training programme at Bar-Ilan University in Tel Aviv.

He says publication of a sex manual for Orthodox Jews was long overdue.

If you have never seen a movie or read a book, how are you supposed to know what you do?”

Ultra-Orthodox boys and girls are educated separately, and have little interaction with the opposite sex until their marriage night, when they are expected to consummate their union.

Physical touch with the opposite sex – even something like a handshake – is only permitted with one’s spouse and close family members. Access to films and the internet is often restricted.

“We wanted there to be a place where people could say, ‘I know nothing and I want to know something,'” says Ribner.

The Newlywed’s Guide to Physical Intimacy, which Ribner co-wrote with Orthodox researcher Jennie Rosenfeld, starts with the very basics – explaining, for example, how the body shape of men and women differs.

Ribner says Judaism regards sex as something positive, but it has become taboo to discuss it openly.

“Sex is only appropriate within a marital context,” he says. “Beyond that it’s not talked about. Because of that, it’s become very difficult for people to have any kind of dialogue about it.”

In Israel’s Orthodox and ultra-Orthodox community, there are manuals written for brides and grooms to be, to help guide them on the subject of intimacy in married life, but they employ allegorical, vague terminology and no explicit how-to instructions on matters of sexual intercourse. So Ribner’s book enters uncharted territory.

Instead there is a sealed envelope on the back flap, with a warning to readers that it contains sexual diagrams. If you don’t want to look at them, you can rip off the envelope and throw it away.

Ribner opens it up to show me what’s inside.

There are three diagrams of basic sexual positions.

The sketches are simple: outlined figures with no faces.

“We wanted this to be acceptable to the widest possible population with the least risk of it being offensive,” he says.

“We did consult many other sex manuals to see what kind of illustrations they use, and we felt they were just too graphic to be comfortable for people who had really had no contact with this aspect of their lives.”

Sex through a hole in a sheet?

It is widely believed that ultra-Orthodox Jews are so concerned about modesty that they have sex through a hole in a sheet.

But this is a total myth, says Ribner: “There has never been a group of Jews anywhere in the world that has advocated having sex through a hole in a sheet. That has never happened. It doesn’t happen today, it never happened in history. It’s not advocated in any text within the Jewish community.”

Jerusalem-based sexologist Nachshon David Carmi has begun to keep copies of the book in his office and has recommended it to some of his patients.

“It’s a very useful book for people who were raised religious and have never received any form of sexuality education,” he says.

“What’s unique about this book is that it speaks to the Jewish religious audience openly about sexuality.”

Sex is a fundamental part of a marital relationship for Orthodox and ultra-Orthodox Jews – and having a lot of children is desirable.

But most ultra-Orthodox children are educated at special religious schools, where they receive little or no sex education.

This “silence” creates a “barrier of shame” over issues to do with sex, says Carmi – and those who seek to educate themselves on the subject can be seen as “subversive and rebellious”.

Ribner’s book was released last year in English, and is about to be published in Hebrew – which will make it much more accessible to an Israeli audience. 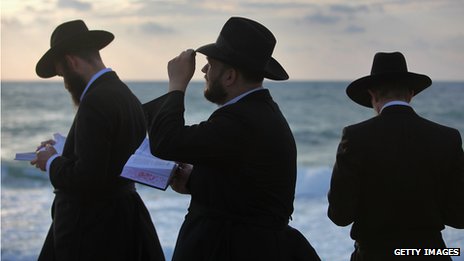 It took a while to find an open-minded translator of Orthodox Jewish background who could translate the book using language that would appeal to a devout reader, says Ribner.

When the Hebrew edition is released in a few weeks’ time, it could create quite a storm, says Menachem Friedman, a professor and sociologist who has written numerous books on Israel’s ultra-Orthodox community. 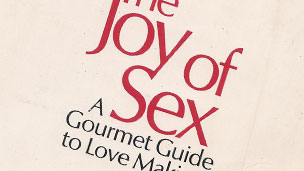 Think of The Joy of Sex and chances are your mind will drift to an image of a man with a bushy beard and a woman with hairy armpits. It is not a photo, but the nearest thing to it in pen and ink.

In early 1970s Britain, photographs would have been too risqué. But hand-drawn illustrations based on photographs? Maybe society was ready for that.”I suspect it will meet tremendous negative reaction – at least within the most extreme elements of the ultra-Orthodox Jewish community,” he says.

But he agrees that such a book is sorely needed, and foresees brisk behind-the-counter sales .

For a newly married couple, it can be very traumatic, he says, to go from a lifetime of near-separation from the opposite sex to a full sexual relationship in just one night.

To test out reaction, I take a copy of the book to an ultra-Orthodox Jewish study centre, where I meet a 22-year-old man in signature black hat and beard. We enter a side room and I show him a copy of Dr Ribner’s book.

“I don’t know any books like this out there. But I think there is a need to explain this topic and to understand it, and to do it in the right way,” he says.

He takes me upstairs, where no-one else is around, to take a look at the illustrations.

Just as he starts removing the diagrams from the envelope in the back flap, he changes his mind and stuffs them back into the envelope.