New multimedia experience at the Tower of David Museum is the largest installation of 18,000-lumen single-chip M-Vision Laser projectors in the world.

More than 3,000 years ago, a redheaded shepherd boy from Bethlehem felled a menacing giant with a slingshot. He played the harp and composed the poems immortalized in the book of Psalms. When he ascended to the throne, he established Jerusalem as the capital of the 12 tribes of Israel.

The epic story of King David has inspired great painters and sculptors for centuries. Now that story is depicted in 18 larger-than-life projections on the ancient stone walls of the Tower of David Museum in Jerusalem’s Old City. 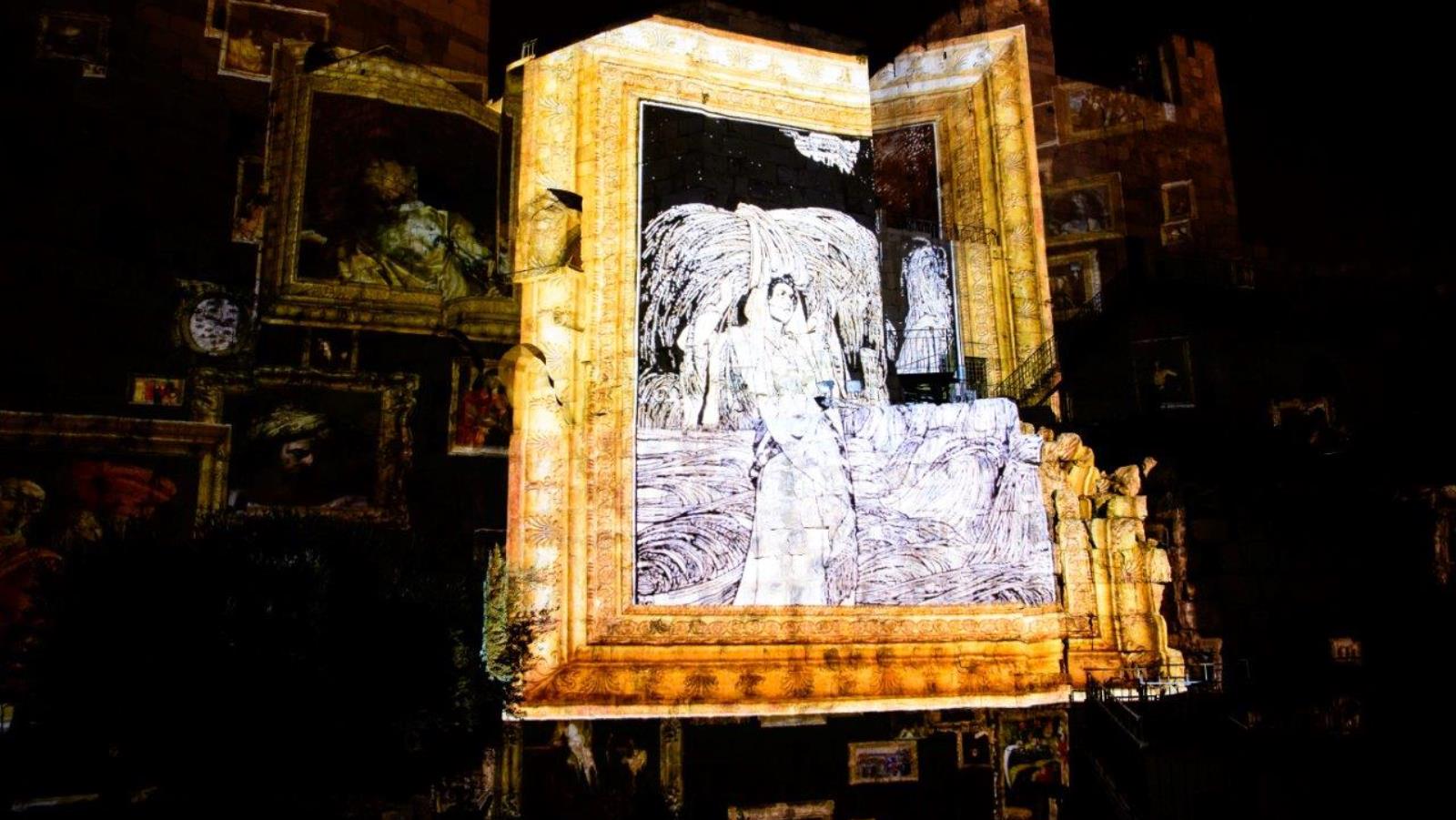 Ruth in the fields of Bethlehem. Detail from the “King David” sound-and-light show at the Tower of David Museum, Jerusalem. Photo by Naftali Hilger

System designer Eli Geffen from Showlogix of Tel Aviv says it is the largest installation of 18,000-lumen single-chip M-Vision Laser projectors in the world, illuminating the citadel with 250,000 lumens and 35 million pixels. 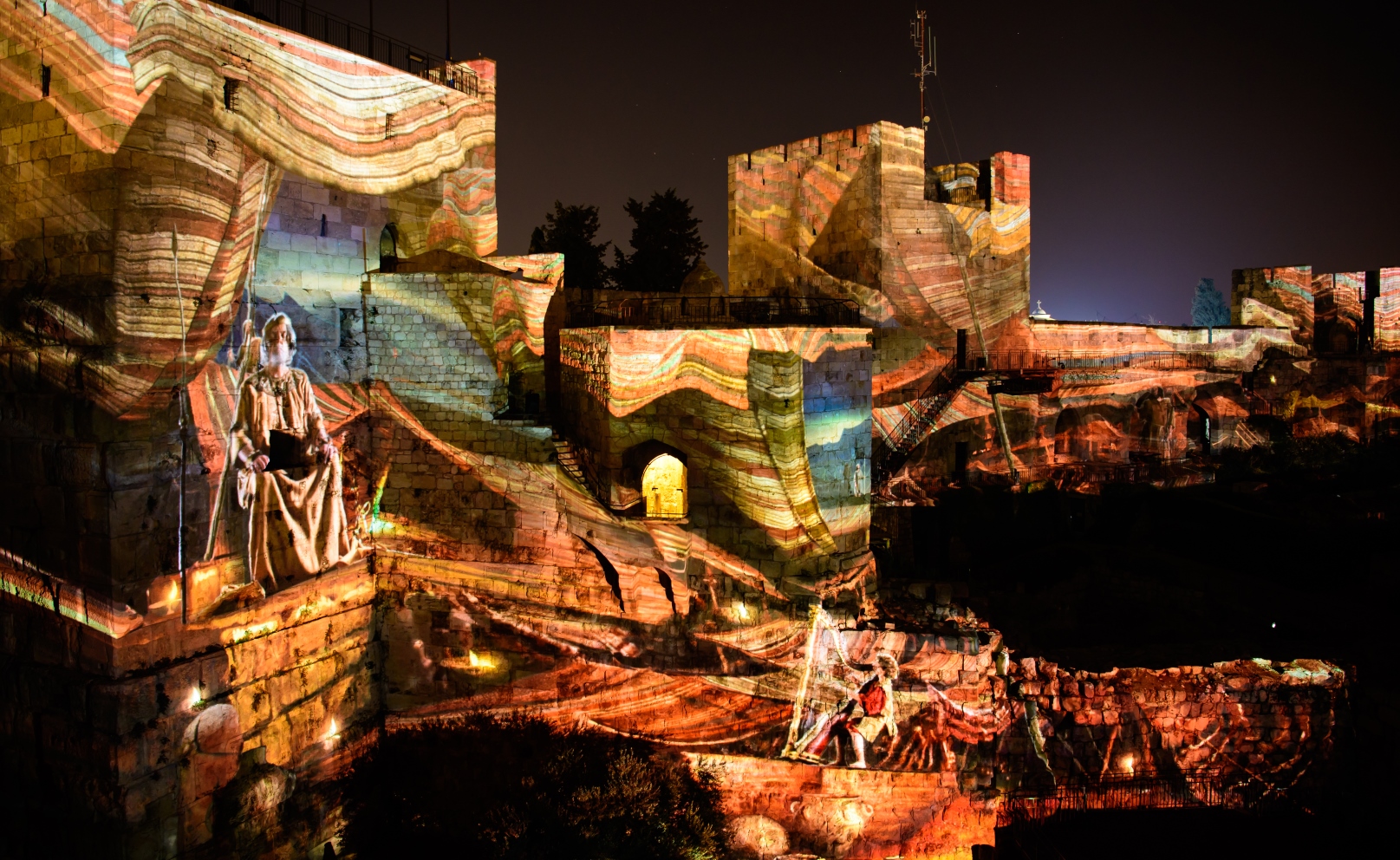 King Saul listens to David play his harp, a scene from “King David” at the Tower of David, Jerusalem. Photo by Naftali Hilger

“The movement and the sharpness of the laser technology brings the subjects to life in three dimensions and makes the show that much more remarkable,” says archeologist Renee Sivan, the show’s concept creator and curator.

Members of the press got a sneak preview of the ₪7.5 million production. The experience begins with a 15-minute pre-show amid the museum’s archaeological findings that bear witness to the history of Jerusalem, from the 13th century Crusader walls to the remains of King Herod’s palace from 2,000 years ago. 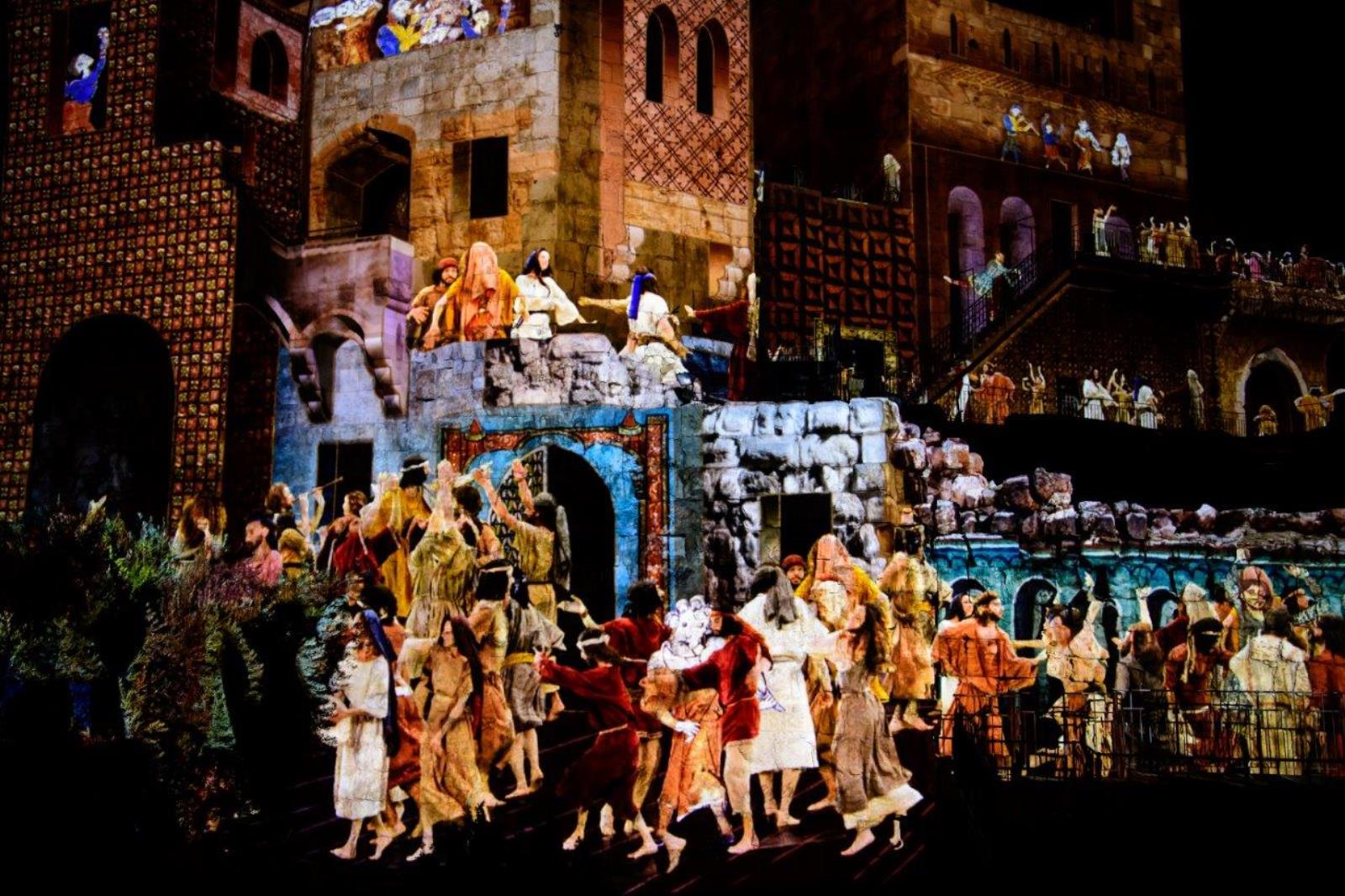 Detail from the “King David” sound-and-light show at the Tower of David Museum in Jerusalem. Photo by Naftali Hilger

After that, it’s time to sit down in the 420-seat, wheelchair-accessible amphitheater to watch the 31-minute “King David.” (Dress warmly for cool Jerusalem evenings year-round!)

The show opens with works of art inspired by the biblical account of David’s life from artists such as Rembrandt, Caravaggio, Matisse, Chagall and Michelangelo. The grand finale is an orchestral celebration of Psalm 122’s prayer for the peace of Jerusalem. 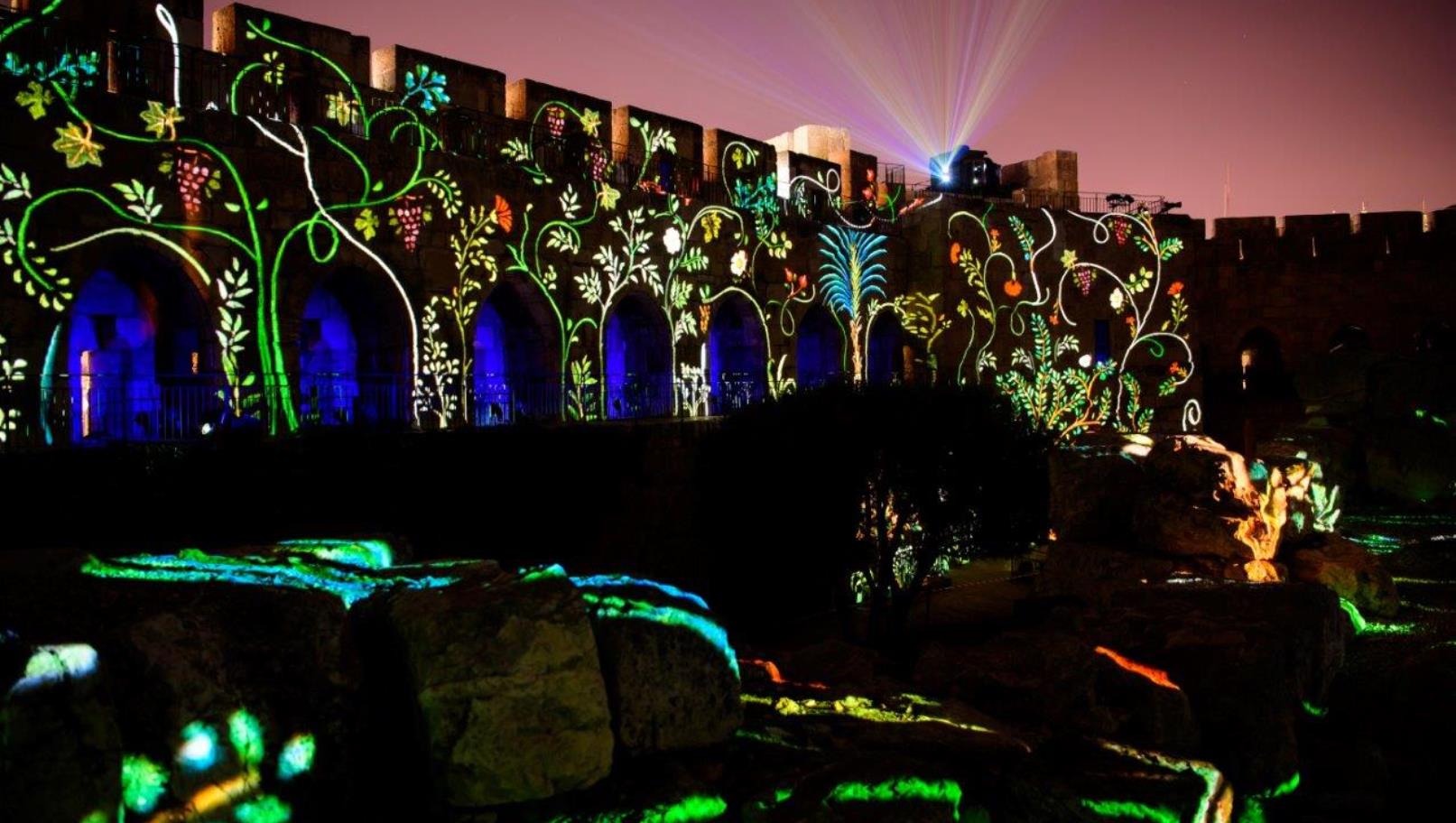 The Ein Gedi oasis on the walls of the Tower of David. Photo by Naftali Hilger

The show’s original music score was composed by the French musician Alexandre Lévy, performed on 40 instruments and piped through a six-channel surround sound system.

Artistic directors Jean-Michel Quesne and Hélène Richard from Collectif K2A, Paris, combined film, live actors, animation, art and illustration. The same duo is responsible for the “Night Spectacular” at the Tower of David (also conceived and curated by Sivan), a visual interpretation based on documented architectural changes of the city throughout its history. 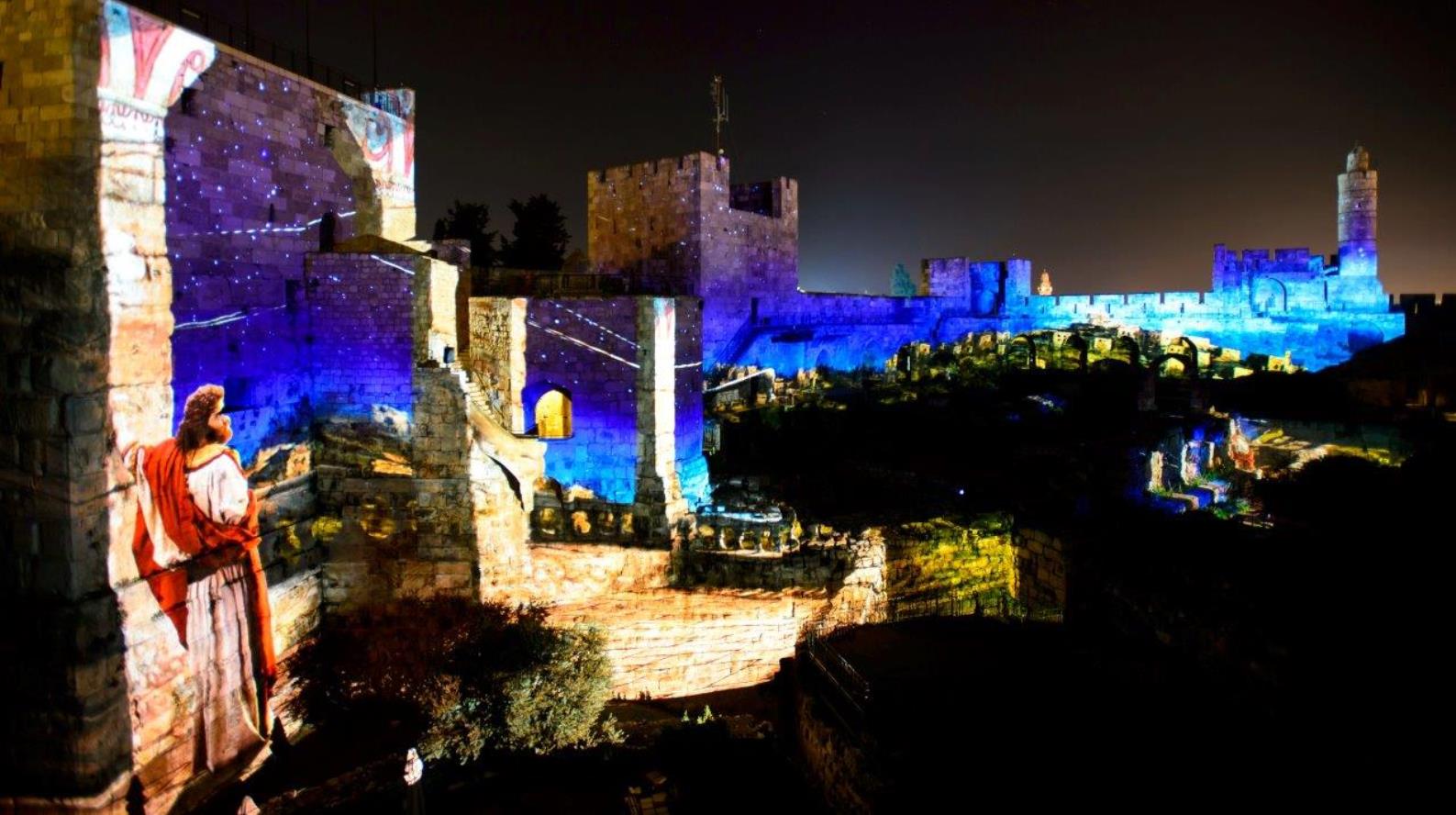 David looking out on his city, detail from the “King David” light show at the Tower of David Museum in Jerusalem. Photo by Naftali Hilger

Some 2 million people have seen “Night Spectacular” over the past decade and it will continue to be shown along with “King David.” The shows run at least twice a night on Monday, Wednesday, Thursday and Saturday evenings depending on the season.