The rare scroll, saved from illegal plunderers, includes Hebrew writing pertaining to Jerusalem; Culture Minister Miri Regev responds to the discovery: ‘It is our duty to take care of the plundering of antiquities that occurs in the Judean Desert, and no less important is exposing the deceit of false propaganda as is once again happening today in UNESCO.’

Robbers looting from the caves of the Judean Desert is a phenomenon with which the Israel Antiquities Authority (IAA) has been contending for years. But in a successful investigative operation, the IAA was able to recover an illicitly plundered extra-biblical document from the hands of a band of antiquities robbers.

The IAA’s Unit for the Prevention of Antiquities Robbery, established in 1985, engaged in a complex enforcement operation that managed to seize an ancient papyrus document with Hebrew writing from Palestinian looters excavating without a license in the Judean Desert caves. The looters, who came from the south Hebron Hills, were subsequently arrested and jailed. 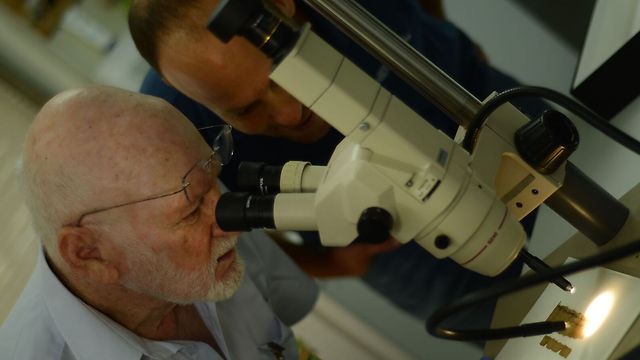 “The IAA obtained information about the stolen papyrus and we were able to track the document down before it disappeared into some private collection,” explained Antiquities Robbery Prevention Unit Director Amir Ganor. “It was a long operation that took place both in the Judean Desert and in the antiquities market,” he said.

“I am glad that we were fortunate to have a role in saving the papyrus, which is an important and special find that bears witness to the historical relationship between the Land of Israel and Jerusalem, and the Jewish people,” said Ganor. 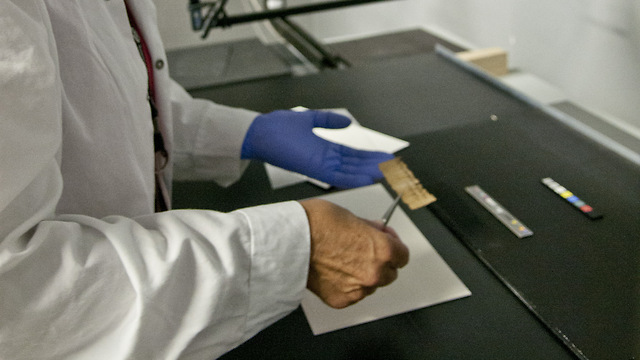 Ganor added that “At this time, the State of Israel is beginning a five-year process to crack down on the looters and to protect the ancient treasures of the Judean Desert that have yet to be uncovered.”

Earlier in the year, the IAA, the Heritage Project of the Jerusalem Affairs Ministry and Culture and Sport Minister Miri Regev (Likud) began promoting a national plan for comprehensive archeological excavations in the Judean Desert caves, including the Dead Sea scrolls. “I will work to increase the punishment against those who rob our country’s antiquities,” Regev had stated. “It is our duty to protect these unique treasures, which belong to the Jewish people and the entire world.”

Regev made the case that such findings add to the absurdity of the recent UNESCO decisions that overlooked Jewish connections to holy sites in Jerusalem.

“The discovery of the papyrus on which the name of our capital Jerusalem is written is further tangible evidence that Jerusalem was and will remain the eternal capital of the Jewish people. It is our duty to take care of the plundering of antiquities that occurs in the Judean Desert, and no less important than this is exposing the deceit of false propaganda as is once again happening today in UNESCO,” said Regev on Wednesday, in response to attaining the ancient document. “The Temple Mount, the very heart of Jerusalem and Israel, will remain the holiest place for the Jewish people, even if UNESCO ratifies the false and unfortunate decision another ten times”.

“It is our duty to take care of the plundering of antiquities that occurs in the Judean Desert, and no less important is exposing the deceit of false propaganda as is once again happening today in UNESCO,” added Regev.

According to Israel Hasson, director of the Israel Antiquities Authority, “The discovery of the papyrus shows that there are other artifacts of tremendous importance to our heritage that are waiting to be found in the Judean Desert caves. The world’s heritage assets are being plundered on a daily basis by antiquities robbers solely for greed. The state has to mobilize and allocate the necessary resources in order to embark upon a historic operation together with the public, and carry out systematic excavations in all of the Judean Desert caves.”

Dr. Eitan Klein, the Deputy Director of the Antiquities Robbery Prevention Unit, said that the document is the earliest extra-biblical source found to mention the city of Jerusalem in Hebrew writing. Most of the letters on it are clearly legible.

“The document represents an extremely rare piece of evidence of the existence of an organized administration in the Kingdom of Judah and highlights the centrality of Jerusalem as the economic capital of this kingdom,” Klein told reporters on Wednesday.

In light of the recent UNESCO resolution, Professor Shimon Ahituv from Ben-Gurion University of the Negev commented that the shipping document gives the international community a factual piece of evidence.

“It’s not just that this papyrus is the earliest extra-biblical source to mention Jerusalem in Hebrew writing; it is the fact that to date no other documents written on papyrus dating to the First Temple period have been discovered in Israel, except one from Wadi Murabbahat,” he said.

“It’s just a little note attached to two jars of wine from Nahartah in the Jordan Valley sent to Jerusalem by a lady. But it is one of three papyri we have from the period of the First Temple,” elaborated Ahituv. “The wines did not get to their intended recipients, as something must have happened along the way, somewhere around Jericho.”

“The UNESCO resolutions have nothing to do with reality. There was a Jewish monarchy here and that is what this ancient wine shipment document shows,” said Ahituv.